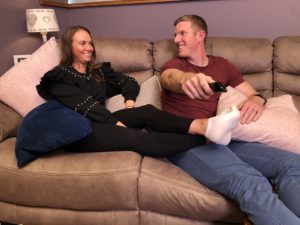 The new series of ‘Gogglebox Ireland’ continues on Virgin Media One tonight at 9 a.m. and a brand new family from the West of Ireland will dissect this week’s most talked-about TV shows.

On tonight’s episode meet Grace and James Skehill from Cappataggle, County Galway who have been married for three years but together for 13.

Grace works in a local crèche and James works in a construction firm but also plays for the Galway senior hurling team.

The telly addict couple always make time to settle down in front of the box together so long as their adorable 18-month-old daughter Sophie agrees to her bedtime.

Though James loves a documentary or a movie, he happily and sometimes not-so-happily tunes in with Grace to her favourite reality shows like Keeping up with the Kardashians. By his own admission, he was afraid to watch Love Island as he was worried he’d get hooked, which he did, to Grace’s amusement.

Tune in to their debut on Gogglebox Ireland tonight at 9 p.m. on Virgin Media One