Kilbride’s ambition of five-in-a-row in the Roscommon Senior LGFA championship became a reality this afternoon as they easily overcame the challenge of Shannon Gaels, 3-12 to 1-7, thanks to goals from Tara Taylor, Eilish Fannon and Aisling Hanly.

The contest turned on two crucial moments in the first half, when Shannon Gaels played with the aid of a strong wind and needed to take a lead into the interval. They created the first goal chance of the game shortly before the water break when a great run from Christina Beirne set up Aishling McDermott, but the full-forward’s shot crashed into the crossbar and out to safety.

Not long after the break, a seemingly innocuous free kick from Tara Taylor on the right wing was allowed to bounce on the 13m line and with goalkeeper Aisling Egan looking directly into the sun, the ball bounced up and crept under the crossbar for the only goal of the half, making it 1-4 to 0-3 at the interval. 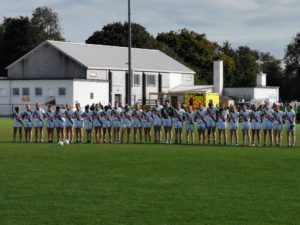 After half time Kilbride really took over, kicking the first four points of the as they began to dominate the battle in the middle third of the field. Fiona and Siobhán Tully made a series of devastating runs that took defenders out of the game and created overlaps, with one such run from Fiona Tully setting up Eilish Fannon for a simple tap in goal. Aisling Hanly soon added another, wrapping up the victory long before Aishling McDermott rattled in a spectacular late goal for Shannon Gaels.

For full report and reaction from this game, see Tuesday’s Roscommon Herald.