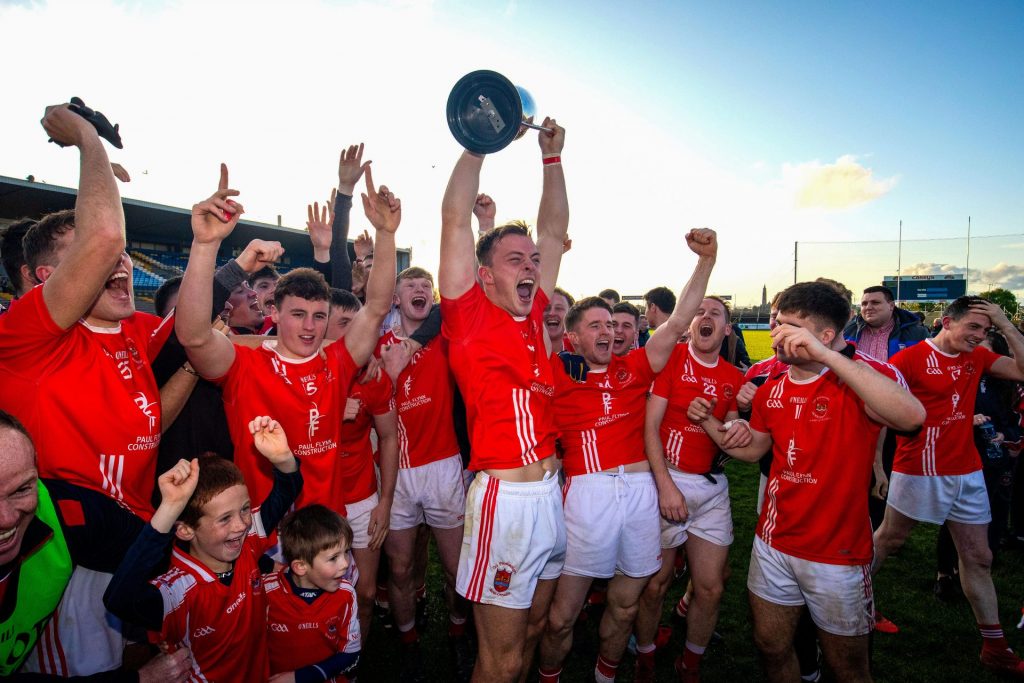 Willie Hegarty believes that the Fahey Cup will be staying in Woodmount. Picture: INPHO/Tom O’Hanlon

If one didn’t read the tea leaves, they could quite easily be led up the garden path when previewing Sunday’s eagerly-awaited senior football championship final between Pádraig Pearses and St. Brigid’s.

The challengers are youthful and free-scoring. Over the past 18 months, however, Pádraig Pearses have passed every test they have been set. The biggest of all, of course, was winning the Fahey Cup for the first time in 2019, shaking off all the accusations that they didn’t have the courage, conviction or character to win a county senior football title.

That maiden triumph has given Pearses confidence, and it was never more apparent against Clann na nGael in the semi-final when, facing elimination, they came from two points down to kick the next three scores in succession and reach successive finals.

Pearses’ reaction at the full-time whistle of that game was telling. It showed what it means to this group of players to defend their title. However, Sunday’s exam will be different. It will require plenty of revision beforehand.

St. Brigid’s have started so many fires, and teams have found it impossible to deal with their youth, skill and pace. They play attacking football that’s pleasing on the eye, and they can kick scores from anywhere.

St. Brigid’s would have you believe that they are like mushrooms, having grown overnight. It’s as if they play the game like they’re having a kickaround in the park.

But this is a club that won seven senior championships in the last decade. It will be their fourth final in five years. When the sides met at the quarter-final stage 12 months ago, it was the best game of the championship.

Manager Benny O’Brien has his team believing that they can walk on water. The players are full of confidence. Their management has adapted a gameplan that suits them perfectly — defend in numbers, attack at blistering pace and make use of clinical forwards who can score from any position.

Their biggest challenge now arrives as Padraig Pearses will meet this particular assignment head on. They will have a plan in place. Their motto will be — if we have the ball, St. Brigid’s can’t score. The champions will try to dominate the middle third, denying St. Brigid’s possession, and dictate the pace of the game. The holders will also bring a physical element to the contest that St. Brigid’s will not have experienced since their opening round tussle against Clann na nGael. It was quite noticeable that when Liam Kearns’ side took the fight to St. Brigid’s that evening, they struggled in that department.

In the meantime, St, Brigid’s have kept improving. They are a beautiful team to watch. They are so well-coached and look so comfortable when on the ball.

Remember that these St. Brigid’s boys have won county minor and Connacht club titles. The Stack and the Sheehy brothers, alongside Peter Domican, bring stability and leadership to the table. It really is a fascinating final on so many levels.

After going through all the evidence with a fine tooth comb, it is my firm belief that Padraig Pearses, by seeing off Roscommon Gaels and Clann na nGael in their knockout championship games, have beaten better teams and are perfectly poised to deliver the double.

If someone had whispered quietly into Oran’s ear before a ball was kicked in this season’s intermediate football championship that they could win the championship without having to play St. Faithleach’s, they would have settled for that.

Maybe, the Gods are about to eventually smile on them. However, when the initial feel-good factor that the Ballyleague men will be elsewhere on county final day wears off, they will know that the team that put St. Faithleach’s on the canvass are just as capable of landing another knockout blow.

St. Dominic’s have matured into a confident, well-drilled outfit. They will respect Oran but, crucially, they won’t fear them. Despite taking Faithleach’s scalp, they will be delighted to enter the final as underdogs.

From the opening bell, it was a case of which two teams from three would make the decider. The popular wisdom suggested that Oran and Faithleach’s would reach the final. However, St. Dominic’s didn’t read the script. Now, with a cup named after their most famous son, Jimmy Murray, up for grabs, they will feel they have a duty to do Roscommon’s All-Ireland winning captain from the forties justice.

Both sides have ticked all the boxes so far, playing attacking football, posting big scores, alongside displaying skill, fitness and assurance in their own ability.

The heartbreak of previous years against Kilmore, Fuerty and Tulsk must be driving Oran to the mountain summit. Given their luck in previous finals, they must have wondered had they run over a black cat?

St. Dominic’s journey to Saturday’s showpiece began in the winter of 2018 when Tomás Gilleran was appointed manager. Mote Park worked off that festive season’s Christmas delights as they reached the county semi-final, only to allow Tulsk reel them in after they made a blistering start. Yet, Gilleran knew that this team were on the right track, despite defeat being their lot.

Now, with the arrival of Darren Dolan from St. Brigid’s alongside the evergreen Conor Fallon playing like a 21-year-old, they find themselves 60 minutes away from their first championship success since 2007.

With Fuerty coming down to intermediate level, St. Faithleach’s going no place and the loser of this year’s final spending another term in the championship, Saturday’s finalists have a huge opportunity to reach the promised land.

By not having closed the deal in recent seasons and with the finishing line once again in sight, Oran will carry huge pressure into this decider. St. Dominic’s will not want to look a gift horse in the mouth but something tells me that the Oran juggernaut won’t be stopped.

Before 2016, the Kilbride senior ladies had never won a senior club championship. Now Oliver Lennon’s side now sit on the cusp of a famous five-in-a-row as they face newcomers Shannon Gaels in Ballyforan on Saturday.

It has been a remarkable journey since Lennon arrived in the hot seat. Out of 28 championship matches, they have only lost once to Clann na nGael in a 2016 group match. Their recorded from the other matches reads: won 25 and drawn two.

Shannon Gaels are the new kids in town. James Deane’s outfit emerged from junior in 2014 and intermediate in 2015, and will now contest a first ever senior decider to showcase the progress they’ve made.

Kilbride won the group game by two points with a couple of last scores. If that is a true gauge of both teams, then a close final is a possibility.

While Padraig Pearses managed seven-in-row between 1998 and 2004, Kilbride’s “Fab Five” should be confirmed this weekend.