Over €14m invested in completing the N60 Oran Road Project 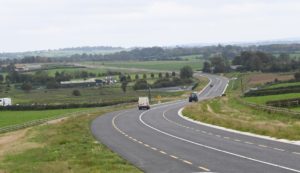 The N60 road project at Oran has been completed at a cost of €14m.

The N60 road project at Oran has been completed at a cost of €14m. The project, which took 18 months to complete, involved the removal of dangerous bends and the laying of a new road over a 3.4km section of N60 national secondary road.

This existing section of the N60 had been identified as being among the worst 50 bends on the entire national road network from a road safety perspective.

The Cathaoirleach of Roscommon County Council, Cllr Laurence Fallon pointed out that new piece of infrastructure highlight4e the importance of delivering on the much-needed improvements along the national secondary road network. “I would like to thank Transport Infrastructure Ireland, Roscommon NRO, Roughan & O’Donovan, Consulting Engineers and the appointed contractor, Wills Bros Ltd. for bringing this project to fruition. We will continue to focus our resources on maintaining and improving the national road network throughout the county.”

The Chief Executive of Roscommon County Council, Eugene Cummins remarked that the “completion of this important road project improves road safety and will benefit the industrial, economic and tourism development of County Roscommon and the west region generally. I would like to thank the local landowners for their co-operation throughout the planning and construction processes involved. I also express gratitude to Transport Infrastructure Ireland for their support and the provision of the necessary funding in these challenging times.”