This afternoon’s Offaly Senior “B” football final between Gracefield and Durrow is set to throw in as planned in just under an hour’s time, despite the objections of Durrow manager and former Roscommon player Shane Curran, who logged onto twitter last night to cite how he felt that the game shouldn’t proceed as a result of Durrow players coming into contact with a confirmed positive Covid-19 case.

A player from the neighbouring Ballinamere hurling club has tested positive for Covid-19, and Curran stated that two members of the Durrow panel (which has considerable overlap with Ballinamere) were subsequently deemed to be close contacts.

1 Without a doubt the most difficult tweet I’ve ever had to publish.

Have taken a decision to step away from County F 2moro in light of blatant disregard 2 public health of players of the @DurrowGAA & @Gracefield_GAA by @Offaly_GAA .

We’re either serious or not
About Cv-19

2 positive test in the club followed up today with another close contact player- no result until Monday @ earliest.

4 No reference to HSE protocols –

5 Precedent in Kerry not followed

Speaking to the Roscommon Herald, Shane said “The Offaly county board left us with no alternative but to play the game. It’s been very hard on the players, there was a lot of rumour over and back yesterday saying that the game would be on, then it was off, then it was on, and we had a team meeting scheduled for Friday night, which we postponed, pending a Covid-19 test result for one player who was deemed a ‘close contact’ of a confirmed case.

“That player has subsequently tested negative but at 1.57 p.m. yesterday another player got a call to say that he was also a close contact, and we’re still waiting on the result of his test.

“The club sent an email yesterday asking for the game to be postponed, but as of now it’s going ahead. I assume Gerry Murphy (selector) will take charge, but I won’t be going to the game, and Owen Mooney (fitness coach) has stepped away as well.

“This is reckless endangerment with little or no respect for players, no club should be put in this position” he added.

The Offaly county board also issued a statement, saying that they have followed all GAA and HSE protocols, as follows: 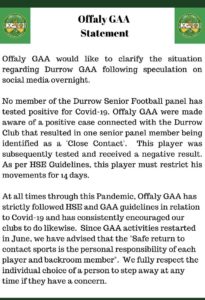