When Roscommon stormed the Kingdom twice in the one day 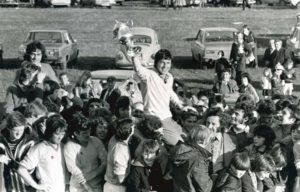 This week marks the 42nd anniversary of one of the greatest days in the history of Roscommon GAA.

Kerry were the visitors to Dr. Hyde Park for the All-Ireland U-21 final of 1978, which was preceded by the Ceannarus tournament final between both counties’ senior sides who had clashed in the All-Ireland semi-final a few months earlier.

As Roscommon have found out down through the years, to beat Kerry once in a meaningful game is special but to do manage it twice in the space of a couple of hours represents the stuff dreams are made of.

Kerry, looking for four-in-a-row, were the warmest of favourites for the U-21 final but Roscommon, with household names like Tony McManus and captain Seamus Hayden in their ranks, stunned the Kingdom to record a famous 1-9 to 1-8 victory.

It was a particularly famous day for U-21 manager Tom Heneghan who had played in the Ceannarus tournament victory against Kerry only a couple of hours later.

The scenes in the Hyde afterwards were quite incredible. Kerry’s confidence had been shattered as the Rossies lapped up that winning feeling.

It was only the county’s second All-Ireland U-21 football championship triumph, the first coming 12 years earlier in 1966 when Roscommon, led by Dermot Earley, shocked a star-studded Kildare team, 2-10 to 1-12, in the decider.