Roscommon are within touching distance of confirming their return to Division One of the Allianz Football League after their greater goalscoring ability proved to be the difference between themselves and Armagh in this evening’s league encounter at the Athletic Grounds.

Two penalties from Enda Smith and a close-range effort from Conor Daly drew green flags as Roscommon prevailed by 3-10 to 0-15 at the home of the Orchard County. 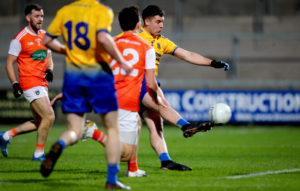 Conor Daly rifles in the third goal of the game in the Athletic Grounds.
Picture: INPHO/Ryan Byrne

It took time for Roscommon to find their feet in the contest, with Cian McKeon registering their first score in the 14th minute, but that was a rare positive moment for the Connacht county’s attack, with no other scores from play before half time.

The first of two Enda Smith penalties just before half time kept them in touch at 0-8 to 1-3 adrift at the break, but it was an eight minute period just before the second half water break when the game was won, with Smith adding a second penalty while Conor Daly took advantage of good approach play from Conor Cox to add in a third almost immediately in the midst of an unanswered scoring burst that yielded 2-2.

Cox, McKeon, Ronan Daly and Ciarán Lennon were all on the scoresheet late on as Roscommon kept Armagh at arm’s length, with Colm Lavin extending his run of clean sheets to five consecutive games.

While mathematically, Roscommon are still not assured of promotion, it would take an incredible sequence of results and a 21-point swing in scoring difference with Westmeath to see them fall out of the top two places on the final day.