Manager has some big calls to make 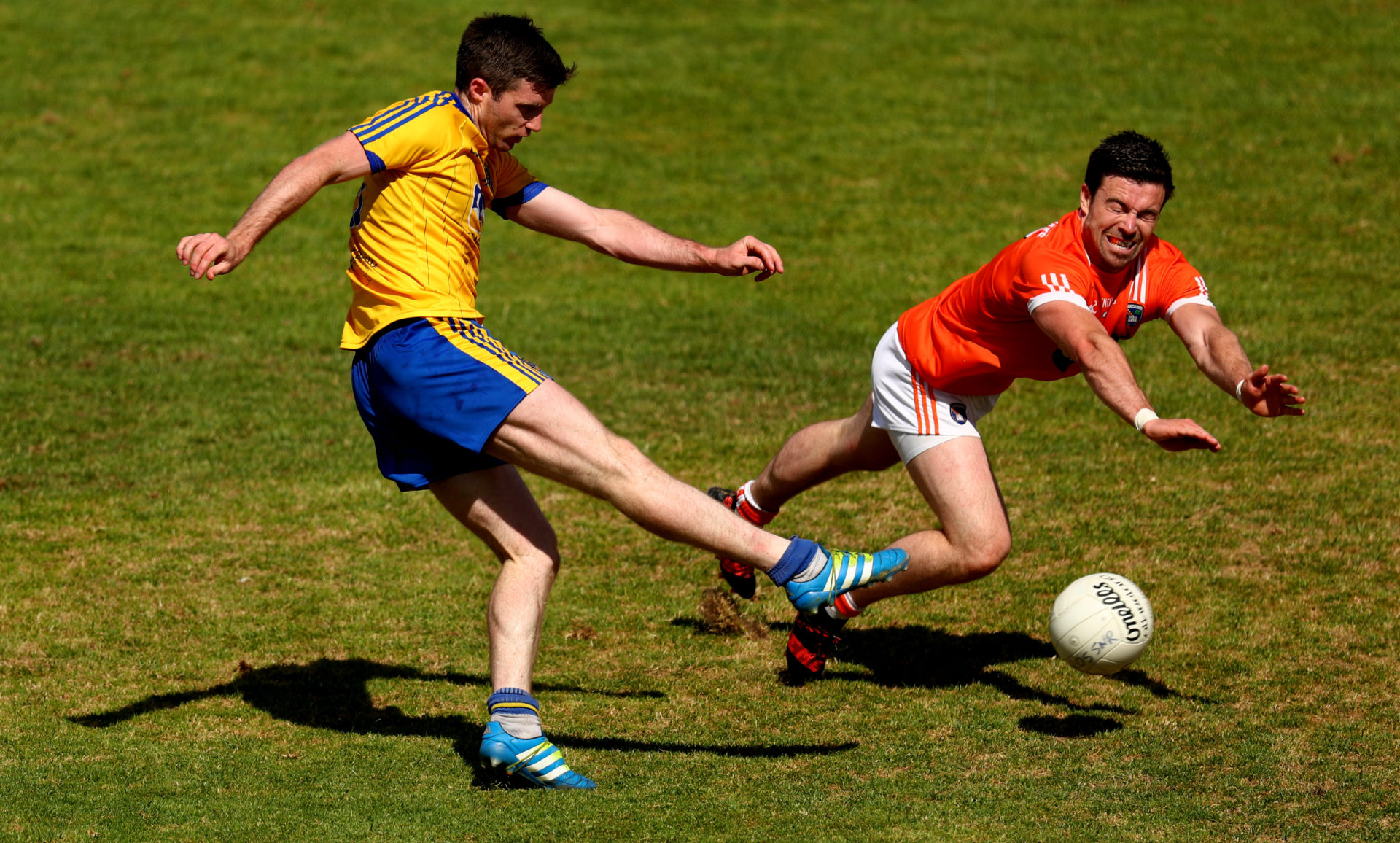 Cathal Cregg gets his shot away on goal, despite the best attempts of Aidan Forker, during the 2018 championship meeting between Roscommon and Armagh. Picture: INPHO

After spending the best part of half a century as a missionary priest in South East Asia and then retired back to a parish in his home county of Offaly, a distant relative of my family is never short of a story to brighten up any occasion. One of the things he casually dropped into conversation a few years ago was that on the island on Borneo, deep in the jungle, he came across natives who distilled their own alcohol out of coconut water.

Needless to say, the distillation process was on the primitive side, and there were times when things went pear-shaped. But, as a rule, they prepared the coconuts in batches of six, and their measure of time was that when the first one exploded, the other five were done.

It’s an approach that has been applied in the world of intercounty GAA, as the standards of preparation demanded of elite players have been raised over the past number of decades. More and more heat is applied, and it’s only when players start to decide that they’re ready to explode and they need to get away that the line is drawn. Consequently, we’ve ended up in a world where teachers and students make up the majority of all county teams.

Yet even among the subset of county players who have the time to do what’s required at the elite level, many of them come to the conclusion that the pay-off simply isn’t worth it. They become yet more exploded coconuts.

Once you get below the elite counties, where All-Ireland success is a very realistic aspiration, for any manager to get his best team on the field is incredibly difficult, bordering on impossible. Roscommon has certainly seen that in recent years, which makes it all the more remarkable that this weekend, Anthony Cunningham is effectively picking the best possible team available to him. Injury has ruled out both Mark Richardson and Richard Hughes, but otherwise, there are no players abroad, no players deciding that the commitment isn’t worth it, no players carrying long term knocks, no players taking a year or two out from the game.

The stripping away of so many of the little things that make life worth living has made it all the more attractive for footballers and hurlers to take on the challenge of intercounty action. Spending the summer with their clubs has reawakened the joy and enthusiasm that players have for kicking a ball around with their friends, and like so much else in life, Covid-19 has led to people looking at things in a whole new light, questioning everything they thought they knew.

The other side of it is that starting on Saturday afternoon, Roscommon supporters are likely to learn more than they ever could have imagined about the real passion that players have for playing football for the county. It’s one thing to be swept along while being part of a county panel, but it’s quite another when the bulk of the work has to be done by yourself, in isolation.

No amount of collective club training can replicate the intensity and demands of keeping yourself at a level to play in a team that aspires to play Division One football in 2021, and while there was some excellent football played on the Roscommon club scene over the past three months, the bar is about to be raised to an entirely different level.

Since taking over at the helm of his native county late in 2014, Kieran McGeeney has made no secret of how he feels Armagh need to get back up to the top tier of league football in order to be able to really compete with the elite counties in Ulster and beyond. He’s never been closer to achieving that goal, and while Armagh has been, and continues to be, very heavily hit by Covid-19 and so unable to train collectively as much as they might like, he has moulded a group in his own image — fiercely devoted and committed to the Armagh cause, and in incredible physical shape.

It was notable that in his interview with the Roscommon Herald elsewhere in this week’s sport section, former Armagh attacker and All-Ireland winner Diarmuid Marsden said that in the local club championships, the existing county players stood out time and again.

Think about that for a moment. From March up until June, players had to work off their own initiative. There was nobody to notice if you skipped the last lap, or consistently cut inside the cone on the way around a corner, or did ten reps instead of 12 in your lifting session. That’s an environment where the most driven, the most self-motivated players, will invariably gain an edge over the rest — and in Armagh, Kieran McGeeney’s players thrived in that environment.

The same could be said of some of Anthony Cunningham’s squad, but not all. In some cases, that might be a reflection of form, or personal problems brought on by an un-natural societal crisis that is affecting different people in different ways, and to very different degrees. Yet it’s a fact that some were able to use the lockdown to push themselves on to new heights and there were others who struggled to stand out to the degree that they might have hoped.

Therein lies the real conundrum for Cunningham — how much weight does he attach to his historical understanding and insight into the players in his panel, and how much significance is afforded to 2020 form? One month of collective work, with some Brigid’s and Pearses players absent for a chunk of that and no competitive fixtures to use as a guide, suggests that this will be one of the more difficult team selection tasks that he and his selectors will have faced since taking on this role.

Then there is the matter of loyalty to those who were there in spring, and who played their part in winning three league games in a row to set up a situation where one win in either of the next two games should be enough to secure promotion.

Ciaráin and Diarmuid Murtagh don’t have anything to prove to anyone in Roscommon, but the starting full-forward line in Newbridge, the last competitive outing for the county, was Cathal Cregg, Ciarán Lennon and Donie Smith. All three of those men produced great form on the club scene, albeit without getting their hands on the Fahey Cup, and telling any of them to step aside won’t be an easy thing to do.

Finally, there is the mental aspect, which has never been more important. Intercounty footballers, or the vast majority of them at least, are used to living in a bubble world, where their lives are managed and lived in order to facilitate playing Gaelic football at the highest level possible. In general, life in your early and mid-twenties is a relatively stress-free time, especially if a little bit of profile opens additional doors for you.

Suddenly, alongside those permanent teachers who are professionally insulated from the chill winds of Covid-19, there are students who are looking on at a world where a vicious recession is inevitable. There are those who might be used to playing football in front of family members, but family members who haven’t made it through the first wave of the pandemic. There may be those who’ve lost large chunks of their income, or perhaps those that had a career path lined up that has since been wrecked and ruined by lockdown.

For one year at least, GAA has taken on a different level of significance for a lot of people. For many, it has become their only remaining positive outlet. For others, it has gone from being the focal point of their lives to being just part of a life, albeit a life that has a lot more storm clouds overhead.

Here’s hoping for a thrilling game, a positive result, and no exploded coconuts.