Roscommon GAA have released the starting 15 players that will try to pick up promotion with a win in Armagh this evening, with Brian Stack named in a new role at centre back while Cathal Compton takes his place in the team at midfield, a first start of the year for the Strokestown man.

In total there are four changes from the team that started the county’s previous league game against Westmeath back in March, with Mark Richardson (injured), Donie Smith, Hubert Darcy and Conor Hussey making way for Sean Mullooly, Compton, Ronan Daly and Ciarán Lennon.

The action gets underway in the Athletic GRounds at 5.30 p.m. and is live on RTE. 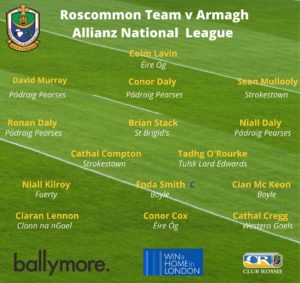