Following the Rossies through the prism of Covid 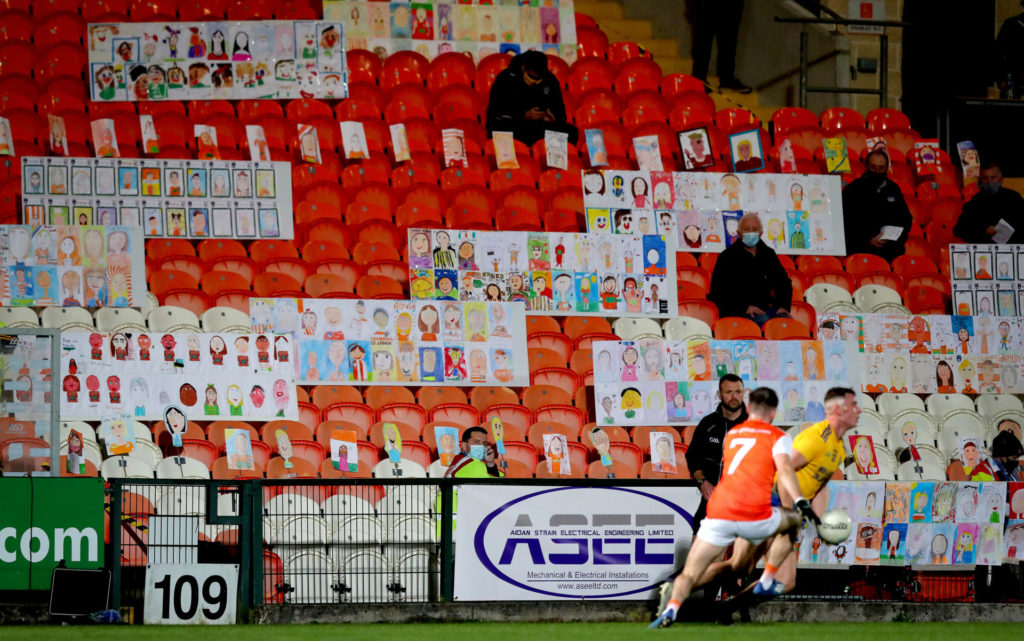 Self portraits from over 3,000 primary school children across Armagh in the stands during Saturday evening’s league game between Armagh and Roscommon at the Athletic grounds. Picture: INPHO/Ryan Byrne

I can safely say that in over 20 years reporting on Roscommon games, it was the strangest experience.

The naysayers had been vocal beforehand. I was even at loggerheads with my mother about what happened in Boyle seven days previously. She didn’t take too kindly to events surrounding “meal-gate” in St. Joseph’s Hall, highlighting the reality that she couldn’t visit her neighbours.

When I pointed out that she wasn’t an elite athlete and that I didn’t expect our county teams to eat on the side of the road, we had “words”.

Both arguments radiated validity I suppose, as everything in the world of Covid does. Maybe there is no right or wrong due to the unprecedented nature of events since March.

However, I will be honest. I still had a nervousness in the pit of my stomach heading for the Athletic grounds in Armagh on Saturday last. For the GAA’s sake, and for the prospect of any more action beyond this weekend, things had to go well.

Of course, there was a selfishness as well. This is my bread and butter — the reason I do this job. Being a supporter as well as a scribe, I realised that Roscommon had a brilliant chance of winning last Saturday evening’s match. By kicking the can down the road would only heighten the theory that the leagues could be scrapped and that we’d all start from scratch sometime in 2021.

Let me be crystal clear. I’m not a spokesperson for the GAA but, like everyone else, I’m entitled to a measured opinion.

The club scene had to shut down given the footage we’ve seen emerging from county final celebrations. Whether it was successful teams and their supporters marching through towns and villages or the rawness of post-match celebrations in pubs, it seemed that not even Covid could halt the age-old GAA tradition of county final parties that often last for days, and weeks, irrespective of whether you’re the winning or the losing team.

But you can’t put that at the GAA hierarchy’s door. Like everything else in the Covid era, it comes down to personal responsibility.

The journey to Armagh, through the Westmeath, Longford, Cavan, Fermanagh and Monaghan countryside, was eerie. The silence on the roads typified the landscape under Covid’s vice-like grip. When I caught up with Willie Hegarty in the Athletic grounds, Willie, like only he can, summed it up perfectly — it was like driving somewhere on Christmas Day.

Upon arrival at the home of Armagh GAA, after consuming some pre-match grub in the car, I reached for my face covering. Leaving nothing to chance, I had more masks than Jim Carrey with me.

Two pleasant officials greeted us on entry where we filled out a typical Covid health questionnaire. We were shown to our work stations in the stand — each journalist spaced two metres apart. Armagh PRO Claire Shields couldn’t have been more helpful with team news etc.

Looking around an empty Athletic grounds, the drawings on seats and at the side of the players’ tunnel by national school children were hugely symbolic, both beautiful and sad. Young children were being denied the opportunity to see their orange-clad heroes in the flesh but they were present in spirit. They were thinking about them.

Like everything else, there was a discernible nervousness early on as both teams figured each other out. When things settled, Armagh looked to be the better team until Enda Smith’s second penalty and Conor Daly’s piledriver turned the game on its head in the space of a few minutes. From there until the finish, Roscommon were in control of their own destiny.

Seeing pictures on social media afterwards of Roscommon supporters decorating their homes in primrose and blue ahead of the big match added to the feel good factor. My nervousness had evaporated in the knowledge that Roscommon were on the cusp of returning to Division One football and that everything had passed off without a hitch.

Anthony Cunningham hoped afterwards that the victory had given the people of Roscommon a lift. It did that, and more.

For those interested, the Roscommon players consumed a meal, socially-distanced, in the main stand afterwards. Journalists were given a pot of fruit at half time.

Living with Covid does exactly what it says on the tin. Last Saturday, the Roscommon and Armagh senior footballers proved that it can be done in a safe environment. Yet there are no guarantees that we’ll get to feel good about ourselves once more over the coming weeks.