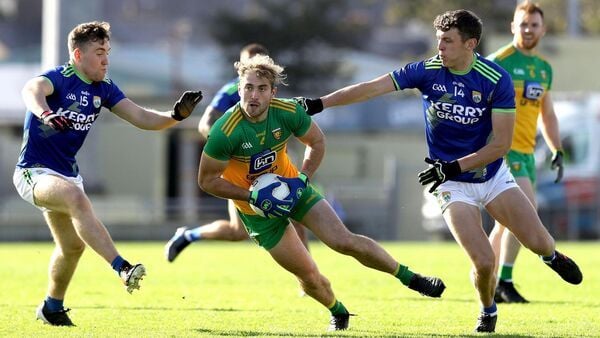 Despite proceedings in Tralee having a challenge game feel at times, Peter Keane’s charges duly got the job done to secure the county’s 21st League title.

It wasn’t just Kerry for whom national silverware was at stake this afternoon, Donegal were also in with a chance of finishing the weekend at the head of the Division 1 table. But as well as requiring a win here, other results would also need to fall their way.

Declan Bonner’s side, though, made the long journey south without a number of first-team regulars – including Michael Murphy, Ryan McHugh and Eoghan Bán Gallagher – and this severely weakened their hand. The visitors were totally outplayed and out-thought during the second-half, a 35-minute period where they managed just two points, only one of which was from play.

Kerry, by way of contrast, looked far more polished. They fashioned together a number of slick attacking passages in the second-half, most especially in the final 20 minutes when they reeled off seven unanswered points.

On target during this spell of supremacy was Tony Brosnan. He kicked two-in-a-row – one of those a mark – to bring his tally for the day to 0-6. David Clifford, meanwhile, swelled his contribution to 0-5.

There was no speech from the latter when accepting the League silverware from Kerry’s Central Council delegate Patrick O’Sullivan. It was as muted a presentation as you could imagine.

The breeze favoured Donegal in the opening half and yet the visitors to Tralee trailed 2-9 to 0-8 at the break.

Now, it must be noted that this was an understrength Donegal side, with Eoghan Bán Gallaghan, Neil McGee, Ryan McHugh, Michael Murphy and Paul Brennan – all of whom started against Tyrone last Sunday- not among their travelling party of 23. They had more than one eye on next weekend’s Ulster quarter-final.

Declan Bonner’s charges, mind you, did start the brighter. A pair of Ciaran Thompson points shoved them into an early lead and they held onto this advantage to the first water break, the scoreboard reading Donegal 0-3 to 0-2 in front.

Kerry defender Jason Foley was somewhat harshly black carded right before the minute’s break but instead of Donegal making use of their numerical advantage, Kerry outscored their opponents by 2-4 to 0-1 during the 10 minutes Foley was in the bin.

Séan O’Shea delivered goal number one on 17 minutes after a lovely chip pass from Tom O’Sullivan put the Kenmare centre-forward in the clear.

Goal number two arrived two minutes later, a superb individual score from Gavin White. The half-back took possession from Paul Murphy right in front of the main stand some 65 metres from goal. The pacey Crokes man proceeded to weave his way past the various Donegal obstacles until there was no one left to beat but ‘keeper Shaun Patton, and that he duly did with a fine finish.

Thompson (two frees) and Jason McGee landed three-in-a-row to eat into this deficit, but Clifford, O’Shea and Brosnan all split the posts at the opposite end before Conor Lane’s interval whistle to put Kerry in pole position ahead of a second period where they would have the wind behind them.

The aforementioned Brosnan would have been quietly pleased with his first-half contribution of 0-4. It was a fine afternoon’s work for him and Kerry.

Next up is the Munster Championship duel with Cork on November 8th in Pairc Ui Chaoimh.