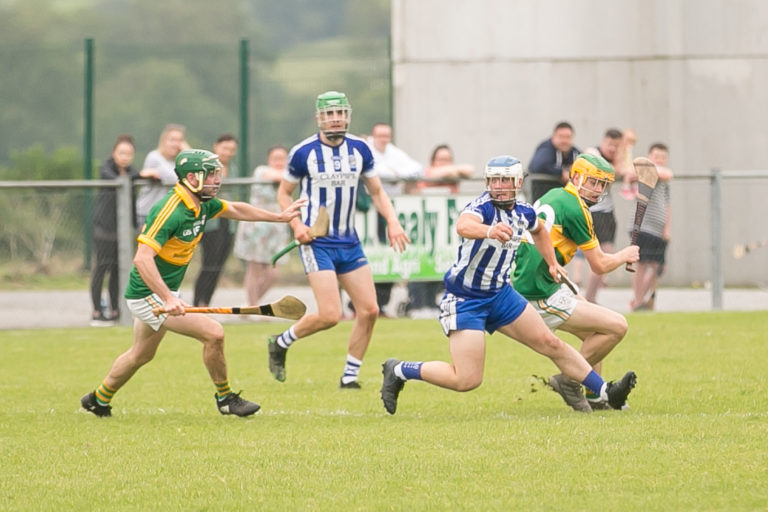 Mickey Joe Egan in action for St. Dominic’s against Oran during this year’s senior hurling championship.

In the era of sports psychologists, performance coaches, motivational experts and any number of other gurus of the mind, every so often you get a reminder that human nature is not all that complicated, and that some of the oldest tricks in the book still can work when it comes to inspiring an athlete to new heights.

Nothing fuels a journey to a new destination quite like being told that you’re not up to the challenge, and that was very much the case for Mickey Joe Egan when he decided to see how his hurling skills would stand up in the white heat of third level competition with the University of Limerick.

The St. Dominic’s man studies Irish and Politics in the Shannonside-based University, and once he got a call-up for the Roscommon county team while still in first year, he took the decision that he needed to hurl in college to properly prepare himself for that challenge. Having missed the initial trials, that involved a phone call to the manager of one of the Freshers’ teams, and as he recalls, it was a conversation that didn’t go particularly well.

“I remember he asked me where I was from, and I told him I was from Roscommon. He was laughing down the phone at me, and I could feel myself boiling — it annoyed me so much. He was used to dealing with lads from Limerick, Cork, Galway, Clare, places like that. But even so, I wasn’t going to let it pass.

“Eventually he agreed to look at me over a few sessions and I told him straight out that I was going to be starting their next big match, which was a semi-final. Sure enough, that was a game against UCC and I started corner-forward and scored 1-2, and I was sure to remind him of it after the game!

“I made sure he knew that Roscommon hurling was decent, and I don’t know if he remembered laughing down the phone, but I certainly didn’t forget it,” he recalled.

Having established himself as a first year, Egan was determined to continue hurling in UL in order to keep developing his game and measuring himself against hurlers from the leading counties in the country.

When he last hurled in UL, prior to the lockdown, it was with the intermediate team. To get an idea of the standard of play of that team, Egan recalled taking on Patrickswell in a challenge game, home club of manager Gary Kirby. The ball was thrown in and he was sharing a field with Aaron Gillane, Diarmuid Byrnes and Cian Lynch.

“I’d say it was the worst game of hurling I ever played. I was looking around thinking how am I on a pitch with these lads, and I didn’t go well at all I was so starstruck,” he admitted.

However he’s gotten over that since, and after spending his last few winters in one of the leading hurling colleges in the country, he feels ready for the challenge of the Christy Ring Cup.

Not only that, he feels that Roscommon are ready.

In a competition where the Rossies have to take on teams that have been a step or two ahead of them in recent years, sides like Down, Kildare and Derry — not to mention the formidable challenge of Offaly, who are the overwhelming favourites for the event — Egan is very clear about what he thinks will constitute a successful championship from Roscommon’s perspective.

“If you don’t end up with silverware, how can you say you’re really successful?,” is his question.

“All of the best hurlers in Roscommon are involved this year, and it’s not often you can say that. It has often been the case in Roscommon in the past that the team picks itself because there just isn’t the depth there, but it’s very different now.

“You can do a lot more when there are big numbers at training, and we’re all coming off what was a very competitive club championship. We were obviously very disappointed from a St. Dominic’s point of view but we hurled well for a lot of it, and overall the standard was excellent. A lot of games were played in the Hyde, which will be a massive benefit to the players.”

He retains a soft spot for Ciarán Comerford, who gave him his first-ever county call-up and made significant progress with the county, but once the Laois man stepped away, Egan was delighted to see Johnny Keane step into the breach.

“Johnny is the man to drive us to a Christy Ring Cup,” he confidently asserts.

“He left no stone unturned putting everything in place, and as a player, if you can see the manager doing that, you’re going to make sure to look after your own corner. It’s particularly the case now with Covid-19 and the restrictions on collective training that you have to do a lot more yourself away from training, but we’re all doing that, and you can see it in lads.

“Of course you’d like more time and preparation but it’s a level playing field for everyone, and I feel physically ready, my hurling’s ready. I know from what I see that we’re ready to take on Wicklow, and it’s great to have them in the Hyde and hopefully be able to use the experience of playing so many club games there over the past while.

“Christy Ring Cup is where we want to be at right now, but there’s no point going out if you don’t believe you can win it,” he asserted.

Maybe all he needs for one final push is for someone to laugh at the idea of Roscommon doing just that. That seemed to work before.