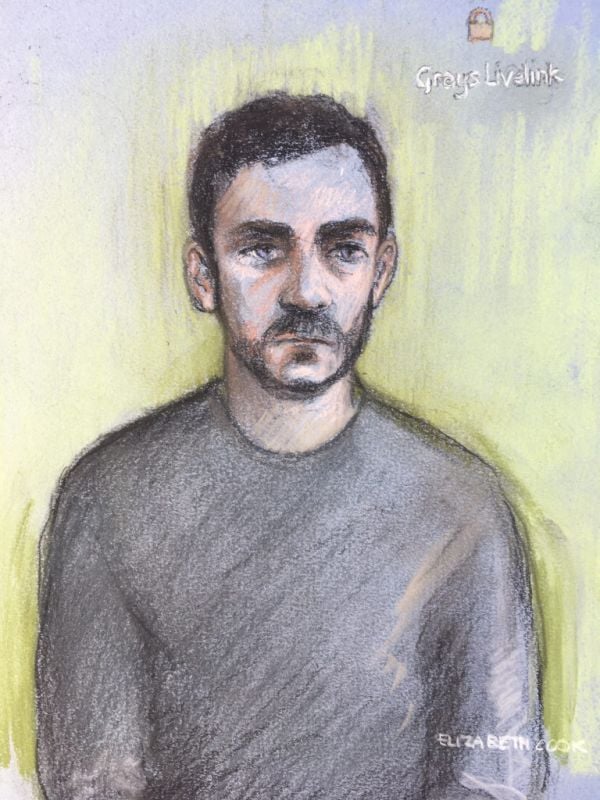 A lorry driver described “loads” of migrants jammed into his trailer and not breathing in a call to emergency services played in court.

On October 23rd, 2019, 39 men, women and children, aged 15 to 44, were found dead in the container after it was transported from Zeebrugge in Belgium to Purfleet in Essex.

The Old Bailey court in London has heard how they suffocated in temperatures of up to 38.5C in the pitch dark interior.

Jurors were shown CCTV of lorry driver Maurice Robinson (26) collecting the trailer and driving out of Purfleet port.

He had received a Snapchat message allegedly from haulage boss Ronan Hughes saying: “Give them air quickly, don’t let them out.”

Robinson replied with a “thumbs-up emoji”, the court was told.

At 1.13am Robinson opened the trailer nearby in Eastern Avenue, Thurrock, and vapour was seen to rise from the doors.

In CCTV footage played in court, Robinson then appeared to run past the lorry cab before he got back in and drove away.

Robinson spoke to Hughes and alleged key organiser Gheorghe Nica by phone and drove in a loop before returning to Eastern Avenue, jurors heard.

Some 23 minutes after finding the bodies, Robinson finally dialled 999 at 1.36.am.

During the call to the ambulance service played in court, Robinson said: “I’m a lorry driver and I just lifted a trailer from the port.”

Asked if the patients were breathing, he said: “No. There, there’s, err, loads of them, there’s immigrants in the back but they’re, they’re all lying on the ground.

“I went and lifted a trailer from Purfleet, the freight terminal, and I got around to where I was gonna park up for the night and I heard a noise in the back and I opened the door and there’s a bunch of them lying.”

Asked how many, Robinson said: “The trailer is jammed. I don’t know.”

He estimated there were about 25 people in the trailer and confirmed none were breathing.

Earlier today, jurors heard how the trailer was loaded on to a ship called the Clementine at the port of Zeebrugge at 3pm on October 22 last year.

The ship set off at 3.36pm with the container on the weather deck, which was open to the elements with an outside temperature of 14C.

At 6.25pm, a young Vietnamese woman took a series of selfies on her phone showing the sweltering conditions inside.

Over the next couple of hours, occupants attempted to make phone calls, with one calling the emergency number for Vietnamese police, without success.

“I want to come back to my family. Have a good life.”

In the background, a voice could be heard saying: “Come on everyone. Open up, open up.”

A voice in the background then says: “He’s dead.”

Cargo operator Jason Rook said in a statement that he smelt a “decomposing smell” as he unloaded the trailer.

He said the Clementine arrived in Purfleet at around 11.50pm, and he had unloaded three or four containers before he got to the one in question.

He said: “As I just passed the doors and reached the left hand side of the trailer I suddenly caught a strong smell that I can only describe as a decomposing smell.”

Jurors have heard that Robinson and Hughes (41) have previously admitted manslaughter of the migrants.

Lorry driver Eamonn Harrison (23) of Co Down, who had dropped the trailer off at Zeebrugge, has denied 39 counts of manslaughter along with Nica (43) of Basildon.

Harrison, lorry driver Christopher Kennedy (24) of Co Armagh, and Valentin Calota (37) of Birmingham, have denied being part of a wider people-smuggling conspiracy, which Nica has admitted to.