A rare chance that must be grasped 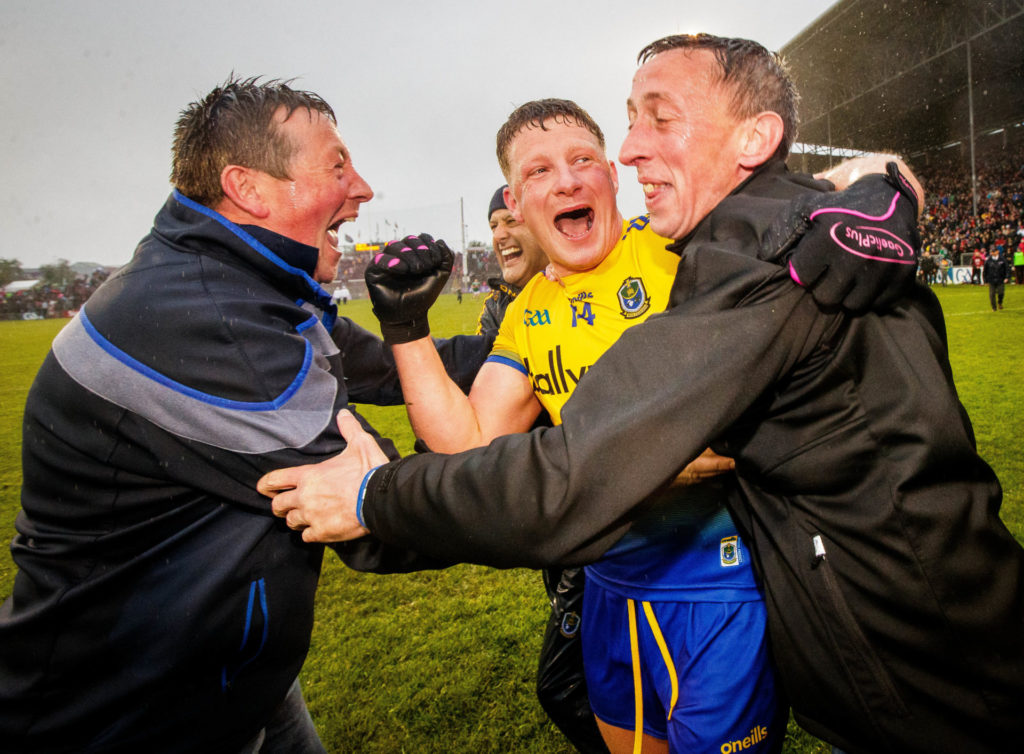 Familiar opponents, but that’s where the similarities with previous encounters of recent vintage appear to end.

Roscommon have rarely been in a better place with the prospect of the “Red and Green” juggernaut coming down the tracks. Last year’s much-heralded championship semi-final raid of Castlebar finally transformed the dynamic of this fixture.

Apart from the arrival of a global pandemic, nothing has changed from a sporting perspective in the meantime. For once, Mayo will genuinely be wary of Roscommon’s challenge when they take to the field on Sunday in the Hyde at 1.30 p.m..

The whole country will be watching in the knowledge that the Rossies have every chance of silencing James Horan’s charges for the second year in succession. Indeed, in some people’s eyes, the home side are favourites. Not since ahead of the 2001 Connacht final has the landscape between these two great rivals being sculpted in such a way.

Roscommon’s optimism is well-founded. Arguably, Anthony Cunningham has the most settled squad at his disposal. James Horan is still looking at players to fill key positions, and the introduction of eight debutants against Leitrim last Sunday buttressed that theory.

The Mayo boss has recalled some of the old guard, and the introduction of a few more loyal servants before throw-in can’t be ruled out, but Cunningham will be very comfortable with the team he has chosen.

The Roscommon manager knows what he has at his disposal and, crucially, the options have never been stronger. Conor Daly has recovered from the hamstring strain he picked up against Armagh, meaning that the Rossies are pretty much at full strength.

To travel to Kingspan Breffni missing eight of the players that lined out against Armagh a week earlier, and win, has the Roscommon public laden with anticipation. Last year, the value of finishing with a strong team was immense during the ground-breaking victory against Mayo. Greater strength-in-depth this season could well be the trump card called on to do the business once more.

There will be a fear that Roscommon have been down this road before against Mayo — when realistic chances for success were quenched by Mayo going for the jugular and kicking scores with their eyes closed, from all angles.

The difference now is that the provincial championship triumphs of 2017 and 2019, alongside the experience of dining on Division One and Super 8s fodder, have been morphed into a version of Roscommon’s best bits. There will be no wondering afterwards what might have happened if different players were available. Everyone is on board now, and it’s time to strike while the iron is hot.

Ironically, one of the remaining boxes to be ticked is taking out Mayo or Galway in the championship at Dr. Hyde Park. Roscommon’s best championship days have been on the road in recent years. If Roscommon are to climb the ladder that bit further, they need to make their home a fortress. Without a partisan home support, it makes Sunday that little bit more difficult.

Is home advantage really an “advantage” without crowds?

It will come down to Roscommon believing that they are now on a par, if not better, than Mayo. Straightforward as it may seem, banishing the inferiority complex of recent years has taken time. There have been some horrendous beatings thrown in for good measure, something Mayo will always have in their locker if they sense Roscommon weakness.

There’s no denying that Paddy Durcan, Lee Keegan, Aidan O’Shea, Chris Barrett, and Diarmuid and Cillian O’Connor are leaders and big game players but James Horan’s philosophy of giving players like Oisín Mullin, Eoghan McLaughlin, Ryan O’Donoghue and Bryan Walsh minutes on the field in recent league games points to a side in transition.

Given the personnel that Roscommon have gained alongside the early-season injury crisis abating since Covid commenced, for once it could be argued that the home side will have the greater reserves of experience. When the shoe was on the foot in the past, Mayo took no prisoners in making it count.

That the home side will be in the position to call on quality like the Murtagh brothers — Ciaráin and Diarmuid, Ciarán Lennon, Conor Devaney, Conor Hussey and Shane Killoran to get the job done when the game is in the melting pot is something to whet the appetite.

In Division One, it was the ability of the top teams to introduce big guns off the bench that made the Roscommon public envious since 2015. Now, finally, Roscommon can become part of that elite club — when the team that finish are as strong as the 15 that started.

But the key thing for Roscommon is to actually play well. The manager believes that his side will need to be at their “ultimate best” to repeat the heroics of 2019. Potential can be only be realised if the big guns end up firing on all cylinders.

But the evidence so far suggests that Cunningham will have his troops coiled like a spring. The manager is experienced enough to know that this is a chance to lay down a serious marker, one that previous teams were never really equipped, both in terms of personnel and belief, to put down.

Pundits purred about Mayo after their demolition of Galway a few weeks ago, hailing them as All-Ireland contenders but failing to recognise the poverty of Galway’s effort. Then, when relegation to Division Two was confirmed after defeat against Tyrone, the same pundits described them as “same old Mayo”. As is usually the case, the reality lies somewhere in between.

Results against certain teams, like all things in life, are cyclical. Roscommon haven’t been in a position like this for some time. It’s not an analogy that fits into the current climate and the uncertainty of the times we live in, but it really is time for this group of players to make hay while the sun shines.