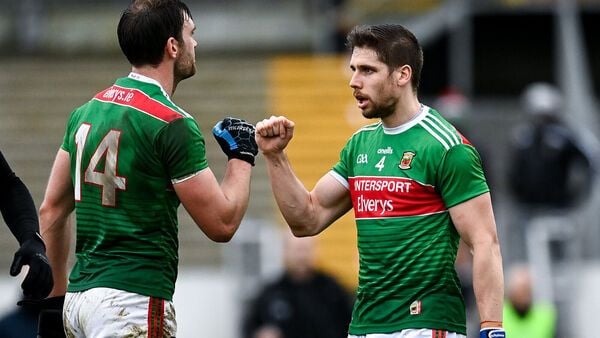 Mayo’s last two championship defeats to Roscommon came after they had been crowned Division 1 league champions earlier the same year – 2001 and 2019.

Perhaps being relegated before facing Roscommon in the championship is a better prep for Mayo then.

They have just went down to a Division 2 that Roscommon have just jumped out of but while the Rossies will enjoy an exalted league status next year, it is Mayo who have the key championship win to their name.

And they were full value for it. Once they took a seven-point lead into the first water break thanks to Diarmuid O’Connor’s well-taken 18th minute goal, there only looked like one winner.

Mayo led by six at half time, by nine early in the third quarter and never less than six as they eventually strolled to a surprisingly easy victory over rivals Roscommon.

Indeed, had there been supporters here, you’d be confident many home fans would have flocked towards the exits a long time before the final whistle.

The Rossies were bidding to do something they had not done since 1980 and put back to back championship wins over Mayo.

It is hard to recall such a strong sense of belief permeating Roscommon ahead of this fixture. It was warranted but it did not rest lightly on the players.

Mayo, meanwhile, appeared emboldened by the pre-match talk and were clearly up for this from the get go.

Mayo would have bitten your hand off for a six point lead at half time but such was their dominance in the opening half, they might feel they should have led by more.

Diarmuid O’Connor’s well taken goal right on the water break put 1-6 to 0-2 in front and while they were well on top in the second quarter, they did not make the most of their dominance and Roscommon had pared the deficit back by one point.

But it never looked in doubt once Mayo got the first three points of the second half, all from the boot of the impressive Cillian O’Connor.

It earns Mayo a first Connacht final appearance since 2015 where they renew acquaintances with Galway. When they met three weeks ago Mayo won by 17 points. One thinks this one will be closer.

Germany may consider Olympic bid after European Championships in Munich

Cristiano Ronaldo hits out at ‘lies’ regarding Manchester United future