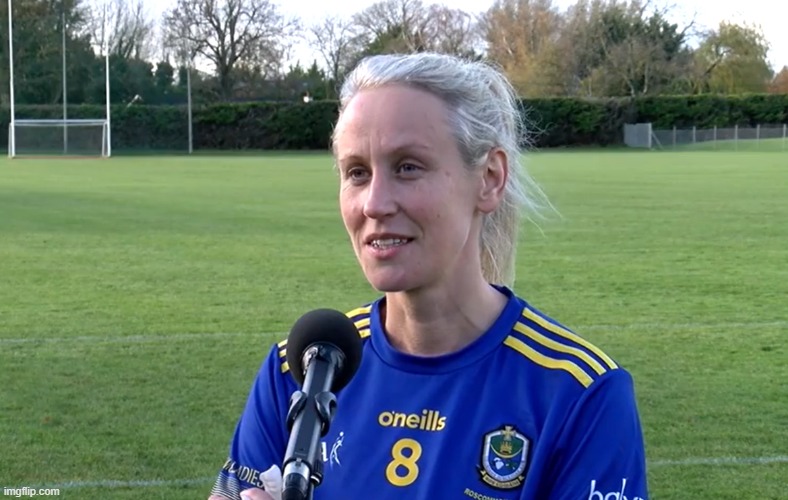 The daughter of Pat and Mairead, the Roscommon midfielder is returning to Championship football at the age of 36. She played her first Championship game in 12 years on Sunday in the win over Wexford in the TG4 All Ireland IFC.

When Caroline left the game, she became a top-level European cycling endurance athlete, before returning to Ladies Gaelic Football this year.

“It’s ferocious now,” she said. “The speed, I’ve never been in a faster dressing-room.”

Caroline is also Vice-captain of Ballyboden Wanderers and will play for Roscommon on Sunday against Offaly.

She said she was delighted to be back playing and to be asked to return by Manager Michael Finneran.

“When Mike gave me the call this time last year, I said why not. It could be the last time I get back out,” she said.

“I have done an awful lot of endurance sports since hanging up the boots so I felt nothing ventured nothing gained.”

She joked that while she won a junior championship in 2001, some of the girls on the team were only born that year.

“They weren’t even born when we were winning an All Ireland in junior,” she said with a laugh.

A tremendously successful but modest athlete, Caroline has participated in endurance, adventure racing like Galeforce west, and also came third in the 2014 European Duathlon Championships

“The body is holding up, I get pretty much pieced back together every week,” she said.

Heavily involved with Dublin’s Ballyboden Wanderers, she said the club has the most scenic pitch in the country, and that the team has a wonderful camaraderie.

Of her Roscommon teammates, Caroline said there is great maturity in the squad.

“I just have to keep the mobility going, look after the body as much as I can,” she said. To watch the full interview, click here.