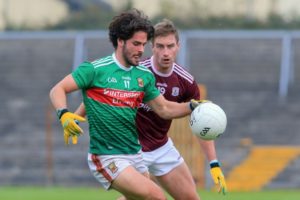 Westport’s Mark Moran will start at centre-forward against Galway.

Mayo senior football manager James Horan has made one change to the team that beat Roscommon for Sunday’s Connacht final against Galway at Pearse Stadium, Salthill.

Mark Moran will replace Ryan O’Donoghue at centre-forward as Mayo aim to win their first provincial crown since 2015.

Moran, who was introduced against the Rossies, was named Man of the Match when the teams last met, with Mayo recording a 15-point victory over the Tribesmen on that occasion in last month’s National Football League clash at Tuam Stadium.

Galway manager Padraig Joyce is due to name his team later this evening.