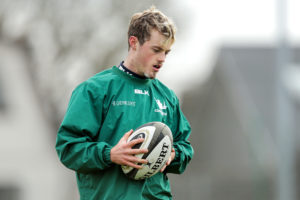 Ballinasloe native Colm Reilly has been handed his first start for Connacht Rugby when the western province welcomes the Scarlets to The Sportsground on Saturday at 7.35 p.m..

The South Roscommon player will wear the number 9 jersey and will be joined by fellow Rossie Jack Carty at half-back.

Reilly, a former Six Nations U-20 winner with Ireland, made his debut off the bench in Connacht’s last outing — a bonus point win in Edinburgh.

“In Conor (Kenny) and Colm, we have two more Academy graduates making their first starts which is a real positive for us as a club,” said Head Coach Andy Friend.