Mayo become kingpins of Connacht for first time since 2015 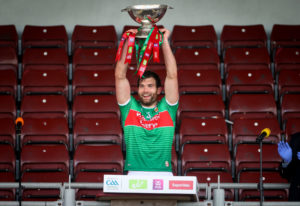 James Horan’s side led 0-8 to 0-5 at the break, having played with a strong breeze at their backs, but by the time Seán Hurson brought proceedings to a close, that advantage had been pared back to just a solitary point, 0-14 to 0-13.

With Matthew Ruane and Tommy Conroy looking lively, Mayo dominated the opening exchanges with Diarmuid and Cillian O’Connor, Conroy and Paddy Durcan among the scorers as the visitors established a 0-5 to 0-2 advantage at the first-half water break.

But they couldn’t push on, not helped by some erratic shooting, as Galway’s rustiness also showed in possession. Johnny Duane departure through injury also didn’t help the Tribesmen but they were still well in contention at the break.

Ruane punctured a huge hole through the Galway defence at the start of the second half to extend his side’s lead but, inspired by Paul Conroy and Shane Walsh, the home side gradually made inroads on the scoreboard.

However, they could never get closer than two points until the game’s dying embers when Seán Kelly was dragged to the turf just outside the box, allowing Walsh to reduce the arrears to the bare minimum.

Referee Seán Hurson, who made a few questionable decisions on both sides, allowed one more play but Galway couldn’t manufacture one more chance from a lineball, and Mayo held on for an All-Ireland semi-final meeting against Cork or Tipperary.

Afterwards manager James Horan admitted that his side made too many mistakes but credited his charges for digging out a result in the face of adversity, highlighting how his side had beaten Leitrim, Roscommon and now Galway on the road to become provincial kingpins for the first time in five years.