Camogie team in better place for visit of Cavan 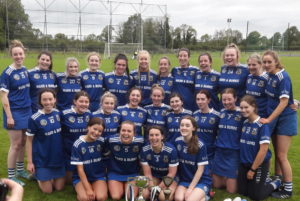 The Athleague senior camogie team celebrate their championship success earlier this summer. Eight of the panel will be involved with Roscommon in Saturday’s All-Ireland semi-final against Cavan.

In the Covid era, the mindset of producing the goods “on the day” has never been more bulletproof. A depleted Roscommon junior camogie team were second best against Armagh a few weeks ago but, unlike the senior men’s footballers who underperformed against Mayo and suffered elimination, Karol Collins’ side have a chance to get their campaign back on track when they face Cavan in the All-Ireland semi-final of the Premier Junior Championship on Saturday in Athleague at 1.30 p.m..

Given that Roscommon were badly hampered by a depleted team and uncertainty about making the trip north, the panel are in a much better place this weekend. The withdrawal of counties’ second teams because of the current pandemic means that, despite being soundly beaten by Armagh, Saturday’s match gives Roscommon a realistic opportunity to qualify for a national final.

“We didn’t know what the story was going to Armagh. The communication from Croke Park was poor. Armagh officials were able to tell us how the championship was going to pan out,” outlined Karol Collins.

Cavan, having beaten Tyrone convincingly to secure Nancy Murray Cup honours last weekend, are an emerging force but Collins points out that they haven’t been tested yet.

“They’ve three games under their belt against Tyrone (twice) and Louth, and they won all three comfortably. Johnny Greville has done a power of work with them. They’re building from the bottom up and they’re pulling from a minor team that were successful a few years ago.

“But we’re not that far away. The girls’ reaction since the Armagh game has been brilliant. They’ve knuckled down and worked really hard. With the weather the way it is, it’s all about showing up on the day,” he continued.

Since the Armagh match, key players like Rachel Dolan, Joanne Beattie, Susan Spillane, Emer McNally, Alisha Lenehan have come back into the panel to compliment the existing quality in the form of Chloe Whyte-Lennon, Niamh Conway, Aine O’Meara, Rachel Fitzmaurice and Player of the Match from this year’s county final, Niamh Farrell.

“They’re big additions to us. We didn’t know where we stood a few weeks ago. We’re in much better shape now,” agreed Collins.

Alongside Mary Fleming, Fiona Connell, Richie Feeney and Sarah Newton, Collins know that a realistic chance to reach an All-Ireland final isn’t something to be sniffed at. Despite a disrupted season, Roscommon must make their big game craft at this level count.

“If we could get over Saturday, it would bring the girls on a lot. It would be a huge bonus for us, but the girls know that they have to get out there and perform,” he concluded.

A reminder of Cavan’s credentials were showcased in last year’s All-Ireland U-16 semi-final when they pushed eventual champions Roscommon all the way in Edgeworthstown. The Ulster side will have a spring in their step, but experience is a priceless commodity at this time of year.

It could be the ultimate difference on Saturday.