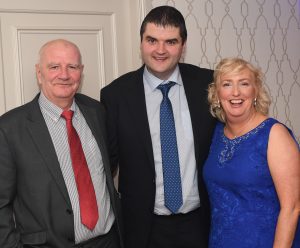 Brian Carroll (centre) is the only nomination for Roscommon GAA Chairperson.

Brian Carroll is set to be elected Roscommon County Board Chairperson when annual convention takes place next month. He will replace Seamus Sweeney who steps down after his five years in the role.

The Kilmore official, who is board’s current vice-chairperson, is the only candidate nominated for the position.

Carroll has also served on a number of committees at club and county level, including secretary of Roscommon County Board, and is a current member of Croke Park’s CCCC (Central Competitions Control Committee).

Another new name on next year’s executive will be John O’Connor from Kilbride as he is the only nomination to succeed Hugh Lynn as PRO.

There will be three contests for places on the 2021 county board executive. Tomás Murray and Tommy Dolan will be vying for the position of vice-chairperson. The two delegates for Connacht Council will be contested by Hugh Lynn, Enda Walsh and John Carty, while Seamus Sweeney, Seán Mullaney and Pat Compton have been nominated for Central Council.

This year’s Convention, which will be held virtually because of Covid-19, will take place on Saturday, December 12th, commencing at 7 p.m..

Voting for new positions on the executive will be carried out by a postal vote. Ballot papers will be sent out to the club secretaries a week before the convention.