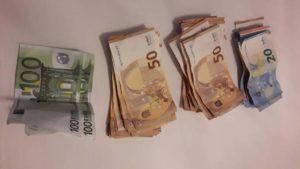 A man in his thirties has been arrested in connection with the seizure of drugs and cash in West Roscommon.

Drugs, including cocaine and cannabis, worth €3,300 and a large amount of cash were seized following three searches in the Ballinlough and Ballaghaderreen areas of the county.

The searches were carried out by gardai from Castlerea, the Divisional Drugs Unit and the Garda Dog Unit as part of an intelligence-led operation.

Cocaine, cannabis herb and a cannabis plant were seized, as well as cash, during a search of one of the properties.

A man has been arrested and is being detained at Castlerea Garda Station.