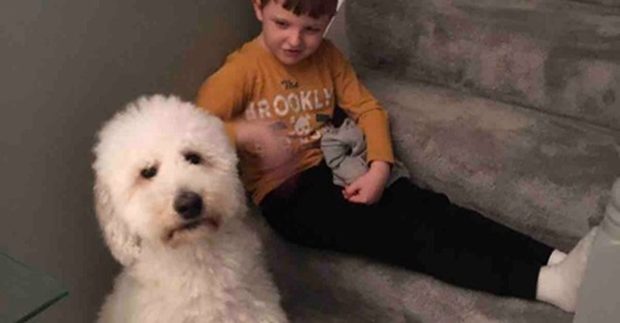 A fundraising drive is underway to help the son of a Gorthaganny native get his service dog fully trained.

Conor  Jordan (6) was diagnosed with autism in November 2016. He has had many obstacles so far in life and still struggles in normal daily tasks, which we all take for granted.

“Conor has made great progress since starting school and is such a fun-loving little boy who makes us smile every day,” said his father, Delcan  Jordan from Tully, Gorthaganny.

Last year Conor was partnered with a wonderful dog, Koby, from the My Caine Companion charity “and to say this dog has changed our lives is truly an understatement,” said his father.

“Conor has had a few instances where he came in danger to himself by bolting away from us, this is a common occurrence in kids with autism. Koby is due to be going in to be a fully trained service dog over the next few months, and that is why we are fundraising. The cost to train a service dog for autism is €10,000 but the difference it makes to a child with autism is unimaginable.

“My Canine Companion receives no funding and totally relies on public donations. We would greatly appreciate any donation no matter how big or how small to help fund the cost to train Conor’s best friend Koby,” said Declan.

To donate to the fund use the link:  https://www.gofundme.com/f/helptotrainKoby?fbclid=IwAR1xhOccvd2AgX_o1Mmdi7kZLiCLDpcLqx_wRpN9D3as4V8U_ryjFpJzPpU