Impeachment motion against Séamus Woulfe to come before Dáil 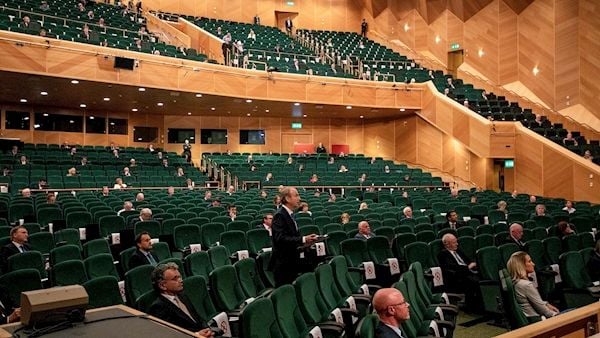 A motion seeking to impeach Supreme Court judge Séamus Woulfe is set to come before the Dáil this week, following an ongoing dispute surrounding a golf society dinner.

Rise TD Paul Murphy and People Before Profit TD Bríd Smith will bring the motion before the house, according to the Irish Times.

It comes amid lingering controversy over the judge’s attendance at – and subsequent handling of the backlash against – an Oireachtas Golf Society dinner in Clifden, Co Galway in August.

The event, popularly labelled as Golfgate, was in apparent breach of Ireland’s Covid-19 restrictions on gatherings at the time, with some 80 attendees.

“This is a question of accountability,” Mr Murphy said on Twitter.

“Through his attendance at the ‘golfgate’ dinner and his subsequent behaviour Séamus Woulfe substantially undermined the public health effort.”

In the Dáil, the TDs will say that the judge breached the Constitution for “stated misbehaviour” and impeachment proceedings should therefore begin.

Taoiseach Micheál Martin confirmed in the Dáil during the week that the Government intended to take no further actions against the judge.

Mr Martin said the “constitutional protections of the judiciary is best achieved in this particular case by taking no further steps in this matter”.

He said it was up to the Oireachtas “to take its own initiative on the matter if it so wishes”.

Additional questions have also been raised about Mr Justice Woulfe’s appointment to the Supreme Court, with Minister for Justice Helen McEntee set to answer questions following days of pressure about the process.

She said in a letter to the Ceann Comhairle that she would reschedule her next parliamentary question session to a date to be agreed by TDs.

However, Opposition parties have criticised her proposal to address the matter during a late night rearranged session of ministerial questions – a format that would require questions to be submitted in advance and a limit placed on the number of TDs that could contribute.

Minister McEntee has rejected any suggestion she was too inexperienced to recommend Mr Woulfe as a Supreme Court judge.

She confirmed that the former attorney general’s name was the only one she put forward to the Taoiseach, Tánaiste and Green Party leader for approval in the summer, only three weeks after being appointed as minister.

She said she examined the suitability of three sitting judges who had expressed interest in filling the vacant Supreme Court seat, but had decided that Mr Woulfe best suited the role.