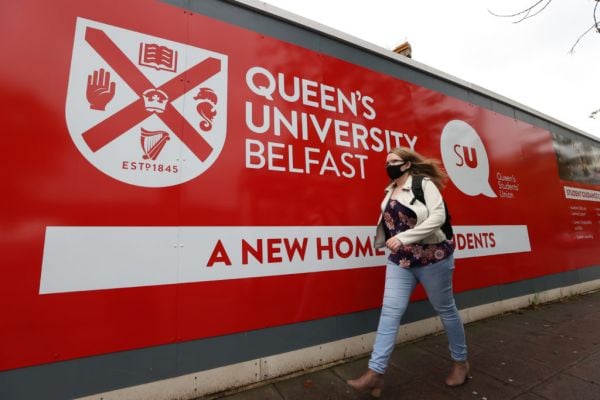 The number of students living at Queen’s University in Belfast has fallen “marginally” amid the pandemic.

A reduction in the number of twin rooms and international students arriving on campus later were partly responsible, the institution said.

Some have deferred arrival until the second semester.

A university statement said: “The number of students living in Queen’s accommodation this academic year (on October 5) is marginally lower than the previous academic year as there are 87 fewer bed spaces mainly due to the closure of Guthrie House accommodation because of the redevelopment of the Students’ Union, and a reduction in the number of twin rooms.”

A freedom of information response from the university revealed numbers of student residents.

Queen’s added: “Our international students are also arriving on campus later because of visa delays and limited flight availability due to the pandemic.

“Students who have been able to travel have been checking in to Queen’s accommodation up until 31 October, and some students are still making arrangements or deferring their arrival until the second semester.

“The university has put in place extensive safety measures at Queen’s accommodation to ensure the safety and wellbeing of our students and staff.”

According to a freedom of information response from Queen’s received in November, this academic year 3,106 students resided in university-owned or run accommodation.

That compares with 3,344 the previous academic year.

Queen’s has investigated a video that appeared to show some of its students dancing to Rock The Boat in one of its accommodation buildings at the Elms student village earlier this autumn.

The FoI said the village had 1,972 residents this year, including Queen’s houses, compared with 2,127 the previous academic year.

In September some students at Queen’s halls were told to self-isolate after a number of people tested positive for Covid-19.

At the time Queen’s said “robust protocols” were in place to minimise further spread.