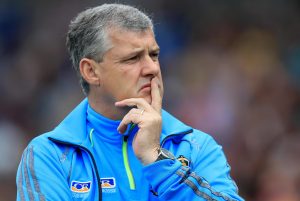 Now that Roscommon’s championship journey has come to and end, Roscommon fans may appreciate a new analysis of the Rossies never-to-be-forgotten triumph in the Connacht final in 2017.

Roscommon native John Scally’s new book ‘The People’s Games: A GAA Compendium’ is a celebration of the magic of the GAA through the stories of some of the people who populate it. Among their number is former Roscommon manager Kevin McStay.

Three days before the Roscommon team he managed played Leitrim in the 2017 Connacht semi-final, McStay wrote to Scally. The letter gives a unique insight in that respect and is reproduced in full in the book.

Roscommon went on to win the Connacht final a few weeks later to ease what McStay calls the “ferocious pressure” he was under.

The former Roscommon manager observes: “Whatever about our shortcomings as a management team, I cannot point a finger in the direction of our players: to a man, they have shown massive commitment to, and pride in, the “Primrose and Blue”.

“I fully expect our boys to perform on Sunday — we have trained exceptionally hard, our morale is excellent and though we have a few injuries we could without, I believe we are ready for the Championship season ahead.

“At the end of the day, despite what people might think because of my birthplace, I so desperately want Roscommon to succeed. Indeed, it is my single last ambition in sport — to lead us to a Connacht final win.”

It is no secret that McStay’s most vocal critic at the time had been Roscommon’s legendary goalkeeper and former manager Gay Sheeran. Scally relates how the following year McStay reached out to Sheeran and the spirit of the response he got in return.

*John Scally’s book ‘The People’s Games: A GAA Compendium’ is available in all good bookshops now.