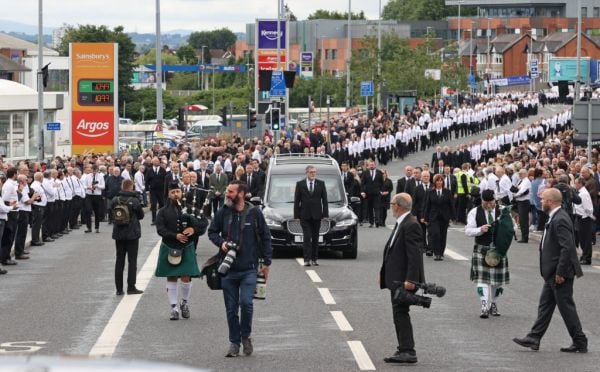 Sinn Féin “faces questions” over an allegation the party emailed members details of the funeral arrangements for senior republican Bobby Storey, and described his wake as “open to the public”.

There was outrage in June when large crowds spilled on to the streets of west Belfast, despite strict coronavirus restrictions banning large public gatherings.

The scenes at the height of the pandemic sparked outrage and calls for Deputy First Minister Michelle O’Neill – who was among attendees – to resign.

The Police Service of Northern Ireland is continuing to investigate allegations that social distancing rules at the time were breached.

It was reported today in The Sunday Independent that Sinn Féin emailed thousands of party members the full details of the funeral arrangements, and told them that the wake would be open to the public.

The party responded to the report saying the email “was sent for information purposes only”.

“This was followed by another email that highlighted that the funeral proceedings for Bobby Storey would be live streamed on Sinn Féin’s social media accounts, which was watched by almost 250,000 people,” a spokesman said.

Political opponents on both sides of the Irish border have voiced criticism of Sinn Féin over the matter.

Fine Gael Senator Emer Currie said the public health message from authorities in both the North and South was “undermined”.

“It also caused anger and upset for understandable reasons, at a time when so many families were unable to give their loved ones a proper goodbye during the pandemic,” she said.

“This email shows that this was not a spontaneous event or a momentary lapse of judgment by the political figures in attendance.

“Not only did they damage public health messaging at a crucial time, they also damaged relationships across communities in the North who needed to come together to fight the pandemic.”

“People did not come onto the streets of Belfast during the height of the first Covid wave of their own volition,” he said.