Reilly produces Man of the Match performance for Connacht 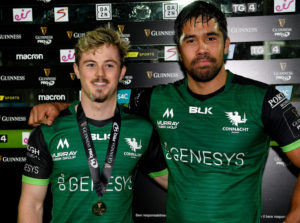 Colm Reilly (left) with his Man of the Match award.

Roscommon native Colm Reilly enhanced his burgeoning reputation with a Man of the Match performance for Connacht in just his second senior start for the province on Sunday.

The former Garbally College scrum-half and U-20 Six Nations Grand Slam winner with Ireland was a central protagonist in Andy Friend’s side’s 47-12 win away to Zebre in their latest Guinness PRO 14 match.

The Western province scored seven tries, with Reilly and his South Roscommon team-mate Jack Carty controlling the contest from half-back.

One of Connacht’s best tries saw a searing break by Reilly set up Alex Wootton for a try in the opening half as the Irish province remained in control of their own destiny throughout.

Connacht’s next match is against the Ospreys on Saturday next at 7.35 p.m..