Cooney sisters reaching for the stars 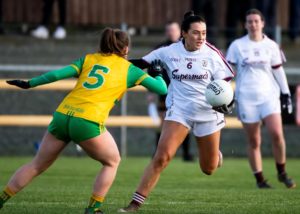 While much of the local interest this weekend will focus on the Roscommon intermediate ladies’ footballers’ quest to reach the All-Ireland final, there will be also more than a passing interest in the fortunes of the Galway senior ladies’ footballers, particularly in West Roscommon, seven days later.

Charlotte Cooney is the team’s vice-captain, while her sister Fabienne is also one of the team’s key defenders. Both ladies were born and reared in Castlerea. The family moved to Galway in August 2003 where they now play their club football with Claregalway.

In an interview last year, Fabienne admitted she was “a Rossie by blood”, and they were reared on the achievements of the men’s team wearing Primrose and Blue.

Their father Barry is a native of Tibohine and a former Western Gaels player, while their mother Pamela (nee McDonagh) hails from Castlerea.

Galway reached last year’s final against Dublin. Their semi-final against Mayo was the first time Galway played in Croke Park since 2005. Now Galway will hope to return to GAA headquarters later in December. 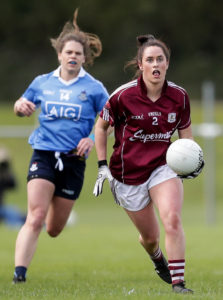 Fabienne Cooney in action against Dublin earlier this year.