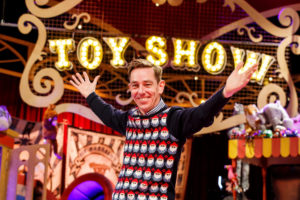 It’s the last Friday night before December, and it’s the night that kids can stay up past their bedtime. It can mean only one thing — The Late Late Toy Show hits our screens tonight.

In a year that has seen everyone’s world, particularly children, turned upside down, host Ryan Tubridy has promised there won’t be a dry eye in the house during this year’s show, which will have a Roald Dahl theme.

“From what I’m getting from people, they don’t want the Toy Show this year — they need it! And that is a baffling prospect, because we have great expectations on us all, and my dream is to make this beautiful.

“Never before did the children, their parents and their grandparents deserve a Toy Show like the one they’re going to get on Friday. And strangely, this is a show for children, and grandparents, as much as for parents, because too many people have spent time looking through windows and meeting relatives through windows,” said Tubridy.