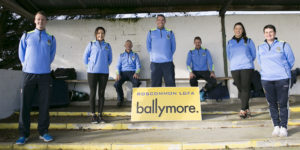 When the final whistle blows in Sunday’s TG4 All-Ireland Intermediate Ladies’ Football championship against Westmeath, it could be the end of the road for Michael Finneran or else he will have just masterminded one of the most famous results in Roscommon ladies’ football history. Whatever happens, there will be no regrets.

“I’ve loved every minute of it and whether I’m walking away next weekend or after an All-Ireland final, I’ll be happy that these girls are in a good place. They’ve made huge strides and they have some really bright days ahead of them,” he summarised.

When Finneran assesses the well-being of his panel, he sees a core group of experienced players in their prime, sprinkled with exciting young talent.

“It’s the perfect mix in my view. The team’s age profile is very good. You have so much experience up the spine of the team, especially at midfield and in the half-forward line. These players are playing the best football of their lives. When young players come into that kind of set-up, it’s everything they could want.

“We’ve a really strong panel now. You can see the impact off the bench in the last two matches. That will allow Roscommon develop. As I keep saying while we’ve done well in the championship, this team have to do better in the league over the coming seasons. They need to be playing at a higher level,” he pointed out.

To end up playing a team like Westmeath, who have plied their trade at Division One, have senior championship experience and have hit 12 goals in their opening two matches, will be the ultimate litmus test. But it’s one Finneran and his players are really looking forward to.

“If we defend the way we did against Offaly, it will be curtains — that’s for sure. But I think we’ll have a different mindset for the Westmeath game.

“I’m not saying we took Offaly for granted. But it was tough to get ourselves back up to the level of performance we produced against Wexford. We were a little bit off, and the girls have now seen what happens when that’s the case.

“But we have the two weeks to get ourselves right. I’m not concerned. The important thing is not to over-react,” he highlighted.

Finneran also suggested the magnitude of the game next weekend will take care of his side’s mentality.

“Of course you’d be disappointed with the goals we conceded (against Offaly). But we’re not going to start messing around with our defensive set-up. Tactically, we might have to tweak things but it’s important not to lose sight of all the good things we did in the last two games.

“It helps that the majority of the girls are used to playing at this stage of the competition. There will be extra attention on us from a media point of view, but the girls won’t be sidetracked by that.

“For them, it’s not about the big occasion. It’s about getting over the line and reaching an All-Ireland final. That, in itself, sharpens the mind. We’re very positive about it,” he maintained.

Having taken care of Wexford,  a team that plied their trade in Division Two earlier this year, a few weeks ago, the confidence derived from that result gives Finneran the belief that his players won’t be too far away against Westmeath.

“The Wexford game gave us a glimpse of what we can expect against Westmeath. It’s not as if we’ve played two Division Four teams and now we have to make a massive jump to be ready for this game. We were delighted to get the Wexford game and we know that we need to find a little bit extra.

“But it’s not impossible. The girls will be well prepared to give it their best shot. It really is set up for us and I think we’re going to produce a huge performance,” he concluded.