Roscommon-born Rector getting used to life in new parish 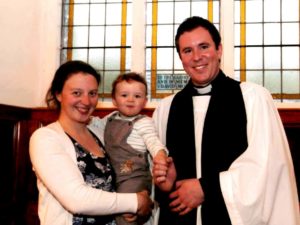 Rev Seán Hanily with his wife Cherith and son Marcus.

A Roscommon Town native is getting used to life as the new Rector of Rathmichael Parish in the Diocese of Dublin.

Rev Seán Jerome Hanily delivered his first service, virtually, in his new Church of Ireland parish on Sunday last, having moved from Omagh, County Tyrone. He is married to Cherith and they have a one-year old son, Marcus.

Seán Hanily grew up in Roscommon and studied music at Trinity College Dublin, where he was also a choral scholar in the Chapel Choir.

After leaving TCD he worked at St. Patrick’s Cathedral for a number of years before beginning his training for ordination in 2015. He served his deacon year in Rathfarnham Parish and has been curate of Drumragh with Mountfield (Omagh) in the Diocese of Derry since 2018.

Rev. Hanily was widely praised in June for sharing a special blessing for Global Rossie Day.

“We think of some of the Roscommon figures over the years who went to other lands and made their mark and today my prayer is with Roscommon people from across the world as they continue to strive to leave their mark,” he said.