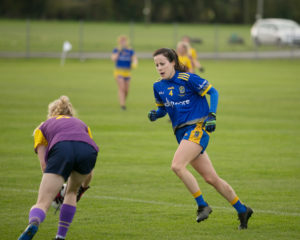 Elaine Murren made her debut for Roscommon against Wexford earlier this month. Picture: Michelle Hughes-Walsh

Twelve months ago, Elaine Murren was living the dream. A year-long career break from primary school teaching took her to Australia. Plans were being hatched to visit other beautiful parts of the world. Life was good.

Having retired after Western Gaels won the 2017 intermediate football championship at just 29 years of age, she had fulfilled her ambition in the game. In her own words, she had “gone out on a high”. It was time to explore the planet and let sport take a back seat for a change.

Yet, on Sunday, she will line out for Roscommon in an All-Ireland semi-final against Westmeath, having made her debut earlier this month…as a 31-year-old.

There isn’t a prodigious underage career to reflect on, no headlines in newspapers to suggest that a star was in the making. Just a club career that procured championship success and that she ended on her own terms.

“When I was in Australia around this time last year, a couple of girls were on to me to join a club in Melbourne. I said I’d try it out for the social aspect and try to get back into the swing of things, but it was more competitive than I thought. It was a huge club — there was something like 85 girls down training one night,” she recalled.

Then, in March, her plans to visit “here, there and everywhere” ground to a halt when Covid hit, forcing her to pack her bags and return to Ireland.

“There was nothing else to do apart from looking after your fitness. When the club scene got the green light, I got a text from Martina Freyne to see if I’d be interested in going back to Western Gaels. I was grateful the girls thought of me because there was nothing else happening,” she revealed.

What’s more, her return coincided with a new position on the team as manager Pat O’Gara catapulted her straight into the half-back line. She had never played in defence before, having plied her trade in the forwards.

Like most players, Elaine derived a great buzz from being able to play games, and the regularity of them, as Western Gaels made the semi-finals of the senior championship before being knocked out by five-in-a-row chasing Kilbride. She subsequently returned to Dublin to get ready for a new term at Scoil Maelruain Junior in Tallaght when, one evening, she received a phonecall she wasn’t expecting.

“It was Michael Finneran seeing if I’d be interested in a few trials. I never in a million years thought that I’d get a phonecall like that. It caught me completely on the hop.

“I said to him: ‘you do realise I’m 31’. He replied by assuring me that age wasn’t an issue. Caroline Conway had returned to the panel last year, and she’s in her mid-thirties.

“I needed some time to think about it, but I text Jenny Higgins straight away and she encouraged me to give it a go for a couple of weeks. I was thinking if I don’t do it now, I’ll never do it.

“I drove down from Dublin to my first training session in Strokestown. I had played some underage football for the county back in the day, but I was pinching myself. All the way down, I was wondering would I be able for it,” she explained.

Elaine, who turns 32 in January, admits that she was “a little off the pace” at that first training session but she thoroughly enjoyed the experience, highlighting the warm welcome she received.

“I never felt like I was one of the new girls. Being one of the older players, I was thinking that I’d find it hard to blend into the group, but I fitted in straight away.

“I took a lot from that first evening. Anyone who knows me will realise that I’ll give 100 per cent to anything I’m involved in. So, after that, the aim was to make the panel.

“I was being used for tactics before the Wexford game. I suppose it was only then I started thinking that I might have a chance of making the team. It all happened so quickly,” she pointed out.

It was a proud day for the Murren family — parents Gerry and Vera, brothers James and Gerard, and sister Jenny — when Elaine acquitted herself really well at corner-back, another first, against Wexford on November 8th as Roscommon prevailed by 1-15 to 2-9 to leave themselves within touching distance of the last four, which was confirmed by the recent victory against Offaly.

“It’s good to have two weeks to prepare for the Westmeath game. It’s a huge challenge but we have our own end goal in mind. We’ll give it everything.

“If you look after yourself and commit to something, anything can happen. You look at Caroline Conway and she how flying fit she is.

“I’m thrilled that I decided to give it a go. I’m really proud of myself. It’s great to be part of such a professional set-up. I’m taking it one training session at a time but I’m still standing,” she concluded.

So much for ladies’ football being a young girls’ game.