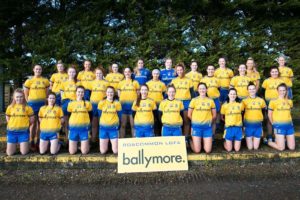 The Roscommon intermediate ladies’ football panel that were defeated by Westmeath.

The Roscommon intermediate ladies produced a magnificent performance in their All-Ireland semi-final against Westmeath, but it still wasn’t enough to reach the final in Croke Park on December 20th.

Westmeath prevailed by 2-9 to 0-13 but Roscommon won many admirers in a match in which they were rank outsiders beforehand, pitting their wits against the championship favourites who were relegated from the senior ranks last season.

In what turned out to be manager Michael Finneran’s last game in charge, Roscommon didn’t enjoy much luck, conceding two soft goals and being on the wrong end of a few marginal refereeing calls.

Barely 30 seconds had elapsed when Roscommon goalkeeper Helena Cummins failed to hold a free from Anna Jones and full-forward Ciara Blundell reacted quickest to toe-poke the ball into the net.

But the “Primrose and Blue” responded magnificently, with Jenny Higgins and Laura Fleming particularly impressive.

The St. Ciaran’s player kicked four points, including three frees, to haul her side back into contention. Aimee O’Connor and Joanne Cregg also kicked fine scores but disaster struck once again on the stroke of half time when Cummins misjudged an effort from Karen Hegarty, which gave Westmeath an undeserved 2-6 to 0-8 lead at the break.

But Roscommon refused to buckle. Caroline Conway rolled back the years at midfield as Higgins and Fleming (two frees) eroded the deficit at the start of the second half.

But, crucially, Roscommon could never restore parity and led by Leona Archibold, who hit two points from play, and substitute Leanne Slevin who converted a soft free late on, Westmeath fell over the line to set up a date with Meath in the All-Ireland final.

But Roscommon could have done no more, leaving new manager Diane O’Hora with an excellent platform to build on in 2021 and beyond.