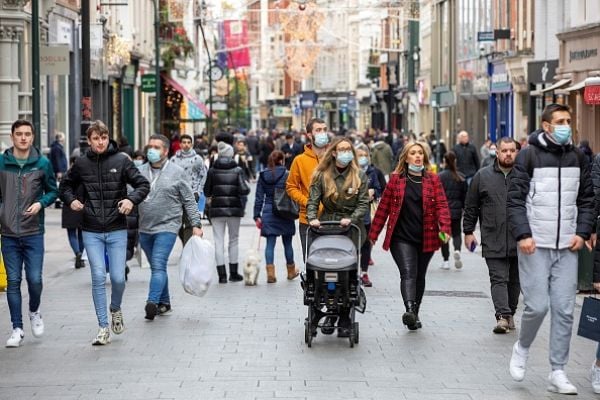 Ireland has the lowest coronavirus infection rate in the European Union, the latest figures reveal.

Luxembourg has the highest incidence of the disease in Europe, with a rate of 1,209. Croatia (1,076.4) and Lithuania (993) have the next highest infection rates on the continent, as of December 2nd.

Ireland was one of first European countries to reimpose tough restrictions six weeks ago when the Government shut non-essential retail and limited pubs and restaurants to takeaway service under its Level 5 restrictions.

Now, however, the economy is one of the most open in Europe after restrictions began to ease from Tuesday.

Large parts of England are continuing to live under the toughest category of Covid-19 curbs, while France will only start a phased unwinding from December 15th; Germany will likely keep bars and restaurants closed until January.

Chief medical officer Dr Tony Holohan said that office Christmas parties should not be happening and pointed out the link between infection and socialisation while urging people to reduce their number of contacts.

He said alcohol has been “a very significant common factor in a lot of the kinds of social experiences in which transmission has occurred”.

Eighteen further Covid-19 linked deaths were reported in the Republic on Tuesday, along with an additional 269 confirmed cases of the virus.

Gardaí scaled back many of their checkpoints as the country moved from Level 5 to Level 3.

The fixed checkpoints on motorway and dual carriageway routes are no longer be in place.

However, under Operation Fanacht more than 100 checkpoints remain in place on main routes to monitor inter-county travel.

Gardaí said there will also be patrols that will focus on the night-time economy.

As restrictions eased, wedding guests and mourners at funerals will be limited to 25 while no organised indoors events are permitted.

Gatherings of up to 15 people are allowed outdoors, while non-contact training may take place outdoors and in pods of 15, and individual training is permitted indoors.

People are still being urged to work from home and public transport is limited to 50 per cent. People have also been advised to stay within their own county.

Places of worship, museums, galleries, libraries and cinemas will also reopen, but wet pubs are closed except for takeaways.