Harry Styles takes swipe at critics of his love of ballgowns 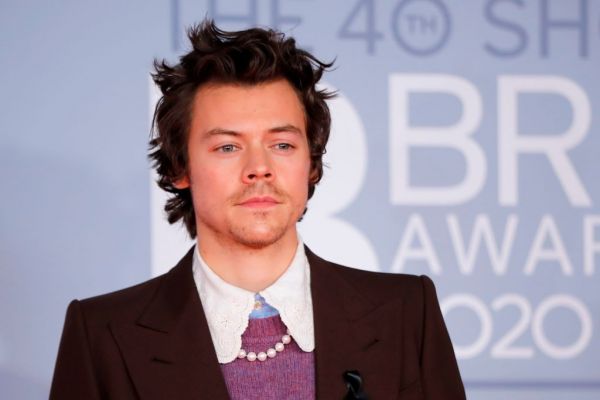 Harry Styles took a dig at critics of his decision to wear dresses as he shared a photo of himself captioned “bring back manly men”.

The comment appeared to be a pointed remark aimed at the US conservative political commentator Candace Owens, who described the “feminization of our men” as an “outright attack” after the former One Direction singer wore a Gucci ballgown on the cover of Vogue.

In the new snap Styles poses in a powder blue suit with a cinched and ruffled waist, and a ruffled white shirt with large cuffs, holding a banana in his mouth.

His caption of “bring back manly men” directly quotes Owens’s comments after his Vogue cover was published.

She had written on Twitter: “There is no society that can survive without strong men. The East knows this.

“In the west, the steady feminization of our men at the same time that Marxism is being taught to our children is not a coincidence. It is an outright attack. Bring back manly men.”

There is no society that can survive without strong men. The East knows this. In the west, the steady feminization of our men at the same time that Marxism is being taught to our children is not a coincidence.
It is an outright attack.

Styles also addressed Owens’s remarks in an interview with trade publication Variety on Wednesday, saying: “To not wear [something] because it’s females’ clothing, you shut out a whole world of great clothes. And I think what’s exciting about right now is you can wear what you like.

“It doesn’t have to be X or Y. Those lines are becoming more and more blurred.”

The British singer (26) made history as the first man to appear solo on the cover of the fashion bible last month, posing in a pale blue lace Gucci ballgown and black tuxedo jacket, photographed by Tyler Mitchell.

He told the US magazine: “You can never be overdressed. There’s no such thing.

“The people that I looked up to in music — Prince and David Bowie and Elvis and Freddie Mercury and Elton John — they’re such showmen.

“As a kid it was completely mind-blowing.

“Now I’ll put on something that feels really flamboyant and I don’t feel crazy wearing it.

“I think if you get something that you feel amazing in, it’s like a superhero outfit.

“Clothes are there to have fun with and experiment with and play with.

Dressing up, making music, living in the moment: This is what matters to @harry_styles. Boundaries and labels? Not so much. Read the full December cover story: https://t.co/XpEzTsnQY9 pic.twitter.com/sbVeXgtZee

“What’s really exciting is that all of these lines are just kind of crumbling away.

“I’ll go in shops sometimes and I just find myself looking at the women’s clothes thinking they’re amazing.

“It’s like anything—anytime you’re putting barriers up in your own life, you’re just limiting yourself.

“There’s so much joy to be had in playing with clothes.

“I’ve never really thought too much about what it means, it just becomes this extended part of creating something.”