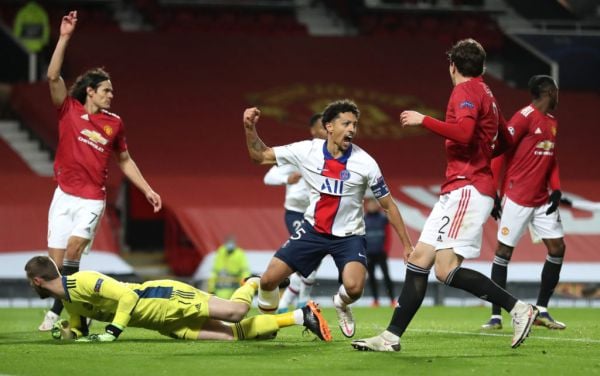 Manchester United blew the chance to seal progress to the Champions League knockout phase as Fred was sent off in defeat to last season’s finalists Paris St Germain.

Having kicked off Group H with a 2-1 win in the French capital and 5-0 shellacking of RB Leipzig, Ole Gunnar Solskjaer’s side knew they would go through to the round of 16 if they avoided defeat on Wednesday.

United looked well placed to secure that vital point after Marcus Rashford cancelled out Neymar’s early stunner, but Marquinhos and Neymar goals either side of Fred’s belated sending off saw PSG run out 3-1 victors at Old Trafford.

The result means the top three in Group H are all level on nine points heading into the final fixtures, with the Red Devils knowing a point in Leipzig will see them reach the last 16.

The away side take all three points.#MUFC #UCL

Neymar completed a win he started in style in the sixth minute, with PSG on top during an opening that saw Fred somehow avoid a red card after pushing his head into Leandro Paredes’ midway through the first half.

Referee Daniele Orsato only gave a yellow card despite reviewing the decision on the monitor and Rashford soon levelled with an effort that deflected in off Danilo.

Fred was perhaps fortunate to avoid a second yellow card before the break, which United returned from strongly as Martial twice wasted fine chances – the second effort after an outrageous Edinson Cavani chip that hit the bar.

But PSG would seal a much-needed win as Marquinhos turned home from close-range before Fred finally received his marching orders, albeit on this occasion he could count himself unlucky.

Neymar added a third in stoppage time after United failed in their search for another equaliser.

Novak Djokovic: I have a duty to speak up for my fellow players