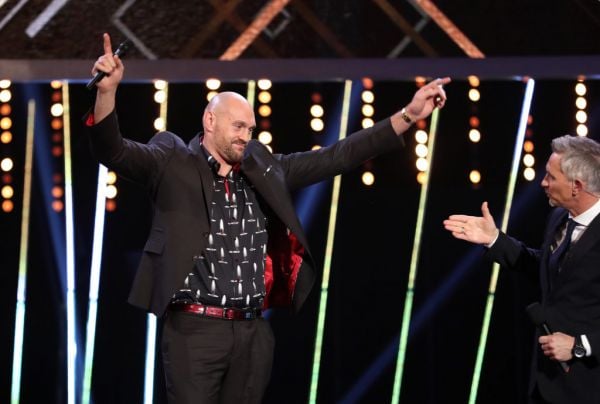 Tyson Fury has been told by the BBC that he will remain on its shortlist for Sports Personality of the Year whether he likes it or not.

Fury, one of six athletes unveiled this week as a contender for the award, used an Instagram post on Wednesday to demand the corporation remove his name.

The world heavyweight champion wrote on his Instagram account: “This is a message for @bbcsport and their SPOTY award – please take me off your list as I’m the people’s champion and have no need for verification or any awards.

“I know who I am and what I’ve done in the sport. I have the love of the people which means more to me than all the awards in the world. To anyone who supports me, don’t vote.”

However, the BBC insisted it has no intention of removing Fury, and says the programme will continue to celebrate his achievements irrespective of his desire to participate.

A BBC Spokesperson said: “The shortlist is decided by an independent expert panel who choose contenders based on their sporting achievement in a given year.

“On this basis Tyson Fury will remain on the list for SPOTY 2020. As always the winner will be decided by the public voting during the live show and it is of course up to Tyson if he chooses to participate in the show.”

Fury’s previous appearance on the shortlist in 2015 caused controversy, with over 100,000 people signing a petition calling for the boxer’s removal over a series of outspoken comments on homophobia and abortion.

But in 2018 Fury’s omission from the final list, following his draw against Deontay Wilder, drew criticism from the boxer’s camp, including his then trainer Ben Davison, who called the decision a “shame”.

O’Sullivan described his own nomination this year as “exciting” and an “honour”, but it is not a view the six-time world snooker champion has always held.

After being overlooked for a place on the shortlist in 2019, O’Sullivan insisted he was not “politically correct” enough to feature, and added: “I’d rather take another few world titles and tournaments than a personality award.”

Hamilton, the 2014 winner, has also previously expressed his reluctance, explaining in 2018 that he found such shows “awkward”, and adding: “I don’t really think about it.”

There is already the potential for rancour at this year’s event, after O’Sullivan belittled Hamilton’s world title-winning achievements due to his access to the best equipment, insisting: “It’s a bit like driving around smoking a cigar with one finger on the wheel.”

This year’s winner will be revealed at Media City in Salford on December 20th.