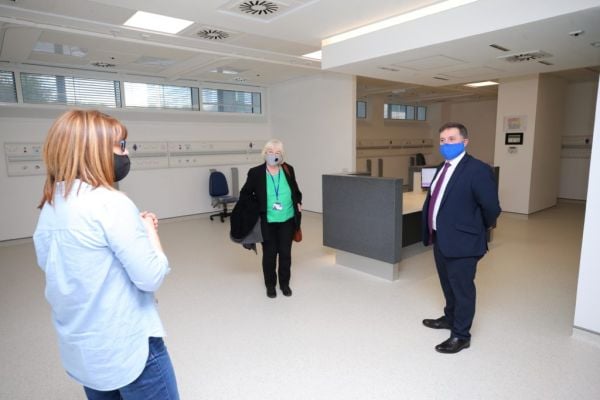 One of the North’s mass vaccination centres is planning to administer jabs to 1,300 frontline workers a day.

The centre in the newly built, but yet to open, emergency department at the Ulster Hospital in Dundonald, Co Down, will run seven days a week and 12 hours a day until at least early February.

The department, which is due to open for accident and emergency patients in the autumn of next year, has been repurposed as a vaccination facility for healthcare and care home workers.

It is one of seven centres across Northern Ireland.

There will be one other on a hospital site – at the Royal Victoria Hospital in Belfast – while the other five will be in leisure centres.

The centre will vaccinate 1,300 healthcare and care home workers a day – running 12 hrs a day and 7 days a week. pic.twitter.com/Wy0h8HYGzR

The Ulster Hospital, which is on the eastern outskirts of Belfast, will see 18 health and care home staff vaccinated at a time in separate bays. The vaccinators working in the centre are scheduled to vaccinate six people per hour.

The facility includes areas for people to be monitored for 15 minutes post-jab.

The North’s Minister of Health Robin Swann and the head of Northern Ireland’s Covid-19 vaccine programme Patricia Donnelly visited the site on Wednesday only hours after the approval of the Pfizer vaccine was announced.

While the Ulster Hospital centre is due to start vaccinations on December 14th, it is anticipated some of the other centres could start operating before that.

“We’re very excited, but we knew approval would come at some point for some vaccine,” said Ms Donnelly.

“So we’ve been preparing for that, we feel a great sense of responsibility for getting this right. And we hope we put in place exactly the right kind of arrangements that will do that.”

She added: “We’re expecting deliveries by next week. And once we have it in the warehouses here then we know we can deploy safely.”

Ms Donnelly said the vaccination was different to other programmes in the past because workers have to travel to a central location to get the jab.

At the Ulster Hospital, the Pfizer jabs will be stored in freezers in the nearby hospital pharmacy building.

“We’ve made a very big ask for staff, because we’ve been saying ‘expect to get it within the next number of days, a number of weeks’,” said Ms Donnelly.

“And when we actually call them it might be quite short notice to do that, but we’ll do it as soon as we possibly can.

“Normally in the flu vaccine programme, we bring the vaccine to staff to let them take it up.

“But with this vaccine we cannot bring the vaccine to staff so we’re asking staff to come to the vaccine, which will be in these large centres. So we’re doing a call out and hope we’ll have a good range of uptake.”

Ms Donnelly said the overall target for the vaccination programme was 75 per cent of the population. But she expressed hope there would be higher uptake among healthcare staff.

“But 75 per cent is a very ambitious target for the UK, overall.”

Ms Donnelly said she hoped everyone in Northern Ireland who wanted a vaccine would have had a chance to get it by next summer.

“If we have the continuous supply, we will be confident that we can deliver this by the summer,” she said.

“But you know, make no mistake, the high priority, vulnerable groups will be dealt with immediately.

“And they will be dealt with very early in 2021 and as many as possible within this year.”