Just over two weeks remain until some lucky winner receives the Christmas present of a lifetime – the keys to a brand new apartment in London City Island. More and more people are signing up at https://winahomeinlondon.com/ and there is expected to be a particular rush for tickets today in light of the special 12/12/12 offer from Club Rossie.

Anyone who enters the draw to win the apartment worth £695,000 by 11.59 p.m. tonight will be eligible for an extra draw, where 12 winners will be selected to each win 12 free entries. So – 12 winners, 12 free tickets each, buy on or before the 12th (today) to be eligible. All that remains is for the Roscommon Herald to give 12 great reasons why you should sign up and increase your chances of winning this incredible prize!

Let’s face it. You haven’t got your Christmas shopping done yet, you can’t trust that anything you buy online will be delivered before the 25th, and the thought of braving the shops gives you such a panic attack that you start sweating, your temperature goes up, and then you have to isolate because everyone thinks you have Covid. It’s all a mess.

Meanwhile there is no-one out there who wouldn’t want a free apartment for Christmas, so you can’t go wrong with buying one of these tickets as gifts. Problem solved!

Now that a no-deal Brexit is looking more and more likely, the value of the pound is collapsing. If current trends continue, by January 2020, one euro will buy you approximately 83 pounds sterling. By February you’ll be able to sly over to your new base in Central London, fill your wardrobe with the best Oxford Street has to offer, all for the price of a block of Connacht Gold butter.

There’s no time quite like the Christmas season for family arguments. From children turning feral thanks to a diet that is roughly 82% chocolate, to couples falling asunder because one person wants to watch the Mrs. Brown’s Boys Christmas special and the other starts to wonder what kind of monster they’re living with, it all gets a bit heated. But you can’t go anywhere, because everyone’s terrified you’ll bring Covid into their home. How great would it be to have an apartment in London to escape to? 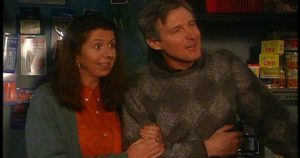 Despite couples seemingly showing a calm exterior, tensions can bubble up under the surface at Christmas time

An old man in a bar turns to the barman and says “I wish I could have back all the money I spent on drink over the years”. The barman replies “That’d be a fair few quid Joe. If you had it all back, what would you spend it on?”. To which auld Joe replies “shur I’d spend it on drink all over again!”.

Let’s be honest, if you don’t try to come up with a more constructive use for the pints money that you didn’t get to spend this year, you’ll end up spending it in a chaotic fashion whenever the pubs do reopen. And since you haven’t been drinking as much, you’ll be out of practice, your tolerance will be way down, you’ll overdo it, you’ll end up vomiting on the street, probably onto the shoes of a Garda, you’ll get arrested, you’ll named in the paper once you appear in court, and you certainly won’t have won an apartment in London. How is that the better option? Be sensible. Buy the ticket.

I could make a joke here, but as I’m a native of Offaly, only living in the county for around eight years now, I’m still not eligible to do that. So we’ll move on.

Seriously. Imagine being able to say to your closest friends that you have a place for them to stay for that weekend? You wouldn’t have to put your hand in your pocket for the full duration of the trip, and it’d be a session that would be remembered forever.

We’ve all done it – pop our names into google,  just to see what comes up. For the vast, vast majority of us, you have to get to about page three of the search results before you get a page that is relevant to you, and even then it’s just the facebook page that you never bother keeping up anymore, and anyone clicking into it will see nothing more than you liking and sharing competition pages in a vain attempt to win a foot spa, or a hamper full of treats for a dog. There’s more to you than this – now you’ll be famous, known everywhere as the person who chipped in to support Roscommon GAA, and who won an apartment in London as a result! 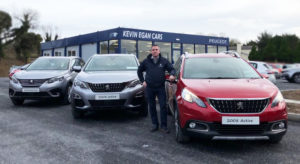 Kevin Egan Cars continues to be the top result when you google “Kevin Egan” in Ireland. I’m not bitter. Okay, I’m a little bitter.

When you think of Irish people in London, you think of heavily-bearded, Aran-jumper-wearing types skulling pints in the Swan in Stockwell, looking for all the world like they’ve had about three showers and zero changes of clothes since getting off the boat in Holyhead in 1984. And after living in the city for a year, I can testify that there’s an element of truth in that. But there are also generations of people that face serious issues around isolation and loneliness, and the London Irish Centre does incredibly good work in this regard. This draw also supports this fantastic organisation. If you do log on to their page however, please ignore the Mayo jersey on the front page.

This week we’ve heard about Tesco stockpiling canned goods, the threat of the British Navy being deployed to fight off raiding French fishing boats, and the Daily Mail suggesting to pizza lovers that they should replace their preferred meal with “toast and chips”. Fresh fruit and vegetables will be freely available if you are happy to raid truck parks in Kent, but otherwise most UK residents are in real danger of developing scurvy due to their food supply breaking down.

This might seem like an odd sales pitch, but for those of you with an interest in history or sociology, it’s a wonderful chance to be on the scene as a once-great world power descends into rabid chaos.

An artist’s impression of what London might look like a few years after Brexit. Note how the well-constructed apartments, like this one on offer from Club Rossie, have stood up the test of societal collapse.

The Boyle man is the closest thing we have to Roscommon royalty, and his instructions are clear.

(11) Very handy if you want to start an affair

Lockdown has not been kind to those busy people out there who try to keep more than one partner going. It’s not easy to pretend that you’re working late in the office when the office is upstairs, and every possible meeting point that you might try and sneak out to under the guise of picking up a litre of milk, is now closed. The Irish Sun reported that early January is the time when people embark on affairs, but that requires more preparation than ever before. What could be more convenient then, than an apartment hideaway in London? Tell your other half you’re going over to sort out the decorating and furnishings, and that’s not entirely untrue. Chances are you will be inspecting some bedding very closely, and possibly even a couch and a kitchen table too.

(12) If you win the free tickets, you can give them out to friends and family, and everyone will think you spent €100 each on them!

Think of the brownie points. You can be known as the generous person who splashed out on all your loved ones, even though the actual cost was closer to €8 each. Some of those people may even feel guilty, which will be very handy when you need someone to call to bring you home after you’ve been out on the town and had one or two substantial meals too many over Christmas.

So there you have it. 12 great reasons to get over to https://winahomeinlondon.com/ right now, and to make sure you have a chance to get 12 extra tickets for the big draw on December 30th. What are you waiting for?