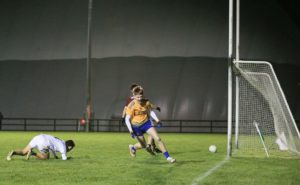 The Connacht minor football final between Roscommon and Sligo will now take place on St. Stephen’s Day at 4.30 p.m..

The move by the Connacht Council has been promoted by the re-introduction of Level 5 restrictions by the Government this afternoon.

The game was originally meant to take place on the weekend of January 9th/10th but was moved to next Tuesday, December 29th.

However, with Covid cases rising, the game has been moved for a second time in the space of 24 hours.