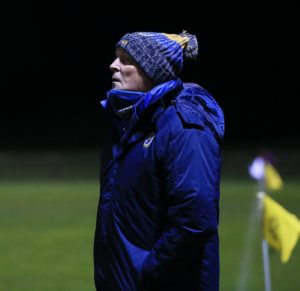 It’s the news that no-one wants to get at this time of year. You’ve come to expect a relatively quiet Christmas period, then suddenly you’re called into action the day after Christmas.

The news that this year’s Connacht minor football final has been brought forward to St. Stephen’s Day changed the landscape for Emmet Durney and his Roscommon panel, but the manager admitted that his group has been only too happy to stay busy over Christmas, because the last thing they want is to endure another long break.

“Given the choice between getting the game played, or else facing into another long uncertain period, there was no real choice to be made,” he told the Roscommon Herald ahead of Saturday’s showdown against Sligo

“It’s been an incredibly difficult year for everyone involved, the same in every county. But you saw in the game against Galway that even when we were under lockdown, the lads clearly did the work by themselves to stay in good shape, and now that they’ve put so much into it, they definitely want to get out on the field against Sligo and play the Connacht final,” he explained.

In a year of upsets, Roscommon’s win over Galway was unexpected to almost everyone outside of the panel and management themselves. The same couldn’t be said of Sligo’s 1-9 to 1-7 win over Mayo on the other side of the draw. The Yeats County won the Fr. Manning Cup in 2018 and 2019, and have racked up a number of big wins in the Connacht minor championship in recent seasons.

“We weren’t hugely surprised by that result, Sligo are very similar to ourselves in a lot of ways,” assessed Durney.

“The usual running order in Connacht is that you’d expect Galway and Mayo to win games against Roscommon and Sligo, but this Sligo group have been very strong up along the age groups and they were fully deserving winners against Mayo.

“They’re very mobile and dangerous in the full-forward line. They’ve a few very good defenders. I particular like the way Luke Casserly drove forward from corner-back, and in the diamond sector they’re physically strong and fit,” he added.

While this Sligo group has known success at county level, most notably that Fr. Manning Cup final win over Laois last year, Durney feels that his Roscommon players will be a more confident group as a result of their win over Galway.

“The lads are definitely on a high, we met up on the Sunday morning after the game and they were ready for action. The plan was to just do a recovery session, but we ended up doing a bit more because they had so much energy,” he highlighted.

“We always knew we had good players, but until you put it out there on the field in championship, you never really know where you are. Now the lads know they can compete at this level, and still they’ll be very grounded.

“We’ve 35 lads in the panel, a few long-term injuries and 32 that are fit to play. One of the most harrowing things I had to do as manager was to tell eight players that they couldn’t even go to the Galway game, but that Sunday morning those eight guys were among the first to arrive, with the same great attitude.

“When you have that, that puts real pressure on the guys that were in the 24 the last day, and that keeps everyone sharp. It’s going to be a huge test, but the lads look like they’re ready,” he concluded.