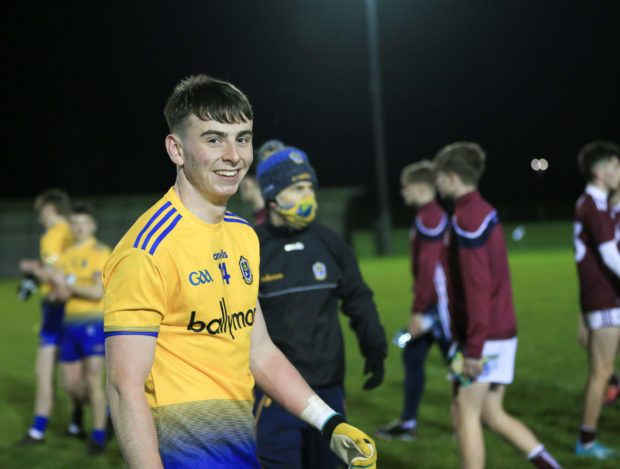 Will Eoin Colleran and his Roscommon team-mates be smiling on St. Stephen’s Day? Picture: Bernie O’Farrell

The only previous meeting of Roscommon and Sligo in a Connacht Minor Football Championship final took place in 1949, when the Rossies prevailed after a replay, only for Sligo to lodge an objection and to be awarded the title in the committee room.

Normally we’d say that at least that’s one thing that won’t happen this time around, but 2020 has been such an incredible year for unexpected events that nothing could be fully ruled out.

The fact that the game is taking place on St. Stephen’s Day in the Connacht GAA Centre of Excellence at 4.30 p.m. tells us everything we need to know about 2020.

An incredibly tight, physical battle is likely where a comparatively low total proves enough for one team to win the game. It’s unlikely that Roscommon will score 2-13, as they did against Galway, but it’s just as unlikely that they’ll need to hit anything like that number to edge out this Sligo group, who posted just 1-9 in their win over Mayo.

For one thing, Sligo won’t be going in blind to the threat posed by their opponents, as Galway did a little over a week ago. On that occasion, Roscommon had the benefit of watching Galway play Leitrim, where midfielder Conall Gallagher and full-forward Cillian Ó Curraoín were in sensational form. Emmet Durney and his selectors clearly used this information well, as neither player was a significant factor in the semi-final.

On the other side of the coin, it seemed like Galway were unprepared for a lot of what Roscommon would bring to the table, most notably the great work of Aaron Shannon as a sweeper, the power of Eoin Colleran as a target man at full-forward, and the tenacity of the Roscommon wing forwards and wing backs.

Both sides will be equally well-informed for this game. If the Sligo v Mayo semi-final was anything to go by, Roscommon can’t bank on being able to outfight their opponents in this final. Sligo’s greater application and appetite for the physical exchanges was just as noticeable against Mayo as Roscommon’s was against Galway, so there’s unlikely to be any significant advantage either way there.

Instead, a lot depends on how this game plays out in terms of style. Roscommon’s attacking play is based around forcing turnovers in the middle third and getting very high-quality ball from those turnovers into their inside forward duo of Darren Gately and Eoin Colleran.

The half-forward line will spill forward in support, but against Galway there was very clear demarcation of responsibility in that regard. Forwards chased scores, backs didn’t push up too often. Aside from one effort from Alan McManus that dropped short, Roscommon didn’t send swathes of players in single digit jerseys charging forward. Instead players like the wing-back duo of Colm Neary and Eoin Ward worked hard in the tackle and then looked to give the ball to a man in a more advanced position.

Roscommon were willing to mix it up and run at goal, but if they did, they attacked from advanced positions and more often than not it was a proven ball carrier, someone like Conor Hand or Ryan Conlon, rather than a rampaging defender.

Sligo, for their part, will carry the ball a lot more frequently and potently. There is scoring power in their inside line, particularly Adam Gallagher and Dylan Walsh in the corners, but in the main these guys like to collect short ball or come on to the play and pick up a lay-off from the first receiver. From the back, they have excellent ball carriers like Zaak Mahon, James Kiernan and, in particular, centre-back Ciarán O’Reilly, who seems to be the talisman in this group.

Cutting off those runs and turning Sligo over in the tackle will be of the utmost importance for Roscommon here, because if the Yeats County can retain possession and create scoring chances at the end of the majority of their moves, even if those chances aren’t converted, Roscommon will find it a lot harder to get early ball into the attackers before the cavalry arrives to close off space.

That said, on 2019 form, Roscommon would never have beaten Galway. By doing so, this panel proved that they can play to a much higher standard. Now the test is to do that on a consistent basis.

If Roscommon can replicate the form from last time out, they will win — but that’s far from a given. Even if they come close, however, that might be enough.

Past form would suggest that Sligo are favourites here, but footballers change as they grow older, and maturity seems to be suiting this Roscommon group.