Players at home equally as responsible for provincial glory — Durney 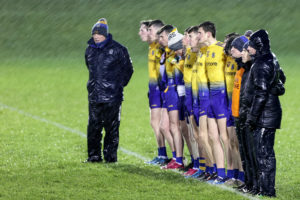 Emmet Durney (left) with his players and management before Saturday evening’s final at Bekan. Picture: Inpho

Roscommon minor football manager Emmet Durney had paid tribute to the players on his panel who weren’t able to attend Saturday’s Connacht minor football final because of Covid restrictions.

Only the 24 players named on the panel could make the journey to Ballyhaunis, alongside one parent/guardian, as Roscommon overcame Sligo by three points to be crowned provincial champions in horrendous weather conditions.

While the celebrations continued around him, the former Clann na nGael player turned his thoughts to those players at home, adding that they had played an integral part in this latest triumph for the county’s underage GAA scene.

“Again, I had to go through that harrowing situation during the week where you’re telling nine lads that they couldn’t be at the game this evening. Now that we’ve won it, it is so hard.

“But Covid is Covid, and there’s nothing we can do about it at the moment. Those guys at home are every bit as responsible for this success as the guys out on the field,” he said.