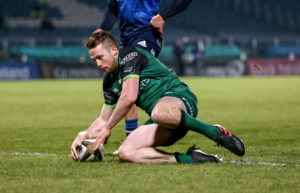 The South Roscommon native and former county minor footballer, who was named Guinness Player of the Match, scored 20 points in the opening half as the western province opened up a 25-5 interval advantage, eventually winning 35-24.

Carty intercepted a Leinster attack to touch down and open the scoring before burrowing over the line from close range. He also added two penalties and a couple of conversions to leave Andy Friend’s side in control at the break.

As expected, Leinster, who had won their last 26 games in the PRO14, mounted a comeback in the second half but an early Carty penalty kept the scoreboard ticking over.

Tom Daly’s late try, which Carty converted, sealed the deal for Connacht in what was the province’s first triumph in their history at the RDS.

Carty has ten caps for Ireland and will hope to force his way into Andy Farrell’s plans for the upcoming Six Nations, which commences away to Wales in Cardiff in February.