Prenty expects 2021 provincial championships to be played behind closed doors 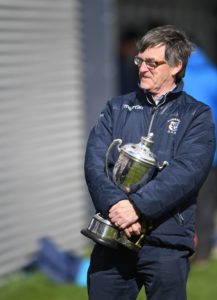 One of the GAA’s top officials has conceded that this year’s intercounty league schedule and provincial championships in football and hurling are likely to continue being played behind closed doors.

Connacht GAA Secretary John Prenty believes that the Government will have to step in with a major financial package to enable the championships take place, in the absence of supporters, once more.

“I don’t think we’re going to be able to run a championship unless we get a commitment from the government that they’re going to give us significant funding for it,” Mr Prenty told the Western People.

“From (Connacht GAA’s) point of view, our income for the year is from three or four games of the Connacht senior football championship in particular. If we don’t have any attendances, that’s going to have a major impact on what we can do as a council. We can’t take two years’ hits in a row,” he stressed.

“There won’t be any attendances up to next May or June I’d say. The Connacht championship is likely to be behind closed doors and, at the earliest, we may get crowds for the All-Ireland Series.”

“If people get vaccinated, you’re going to have to open up some time because if it works, we should be alright,” the secretary added.

Mr Prenty also clarified that the recent Connacht minor football final between Roscommon and Sligo, which was played out in horrendous weather conditions at the Connacht GAA Centre of Excellence on St. Stephen’s Day, couldn’t take place in the nearby Air Dome because of Covid regulations.

“We had an ideal opportunity on St. Stephen’s Day to play in the Dome but, unfortunately, we couldn’t use it because of Covid-19 regulations. It would have been an outstanding occasion if we could have played the Connacht minor final in there.

“I’d say the vaccine will be widely distributed by the time we get into the Dome now,” he concluded.