Return of Leaving Certs to school a ‘Government decision’ 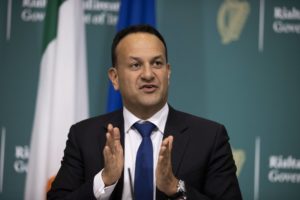 Tánaiste Leo Varadkar has said that the return of Leaving Certificate students to school on Monday “was a Government decision”.

Speaking on RTÉ’s News at One, the Tánaiste clarified that the National Public Health Emergency Team (NPHET) did not give the Government specific advice on the return of Leaving Cert students to school.

“There isn’t specific advice on sixth years, but there is general advice. In the letter from the CMO, to the health minister, which by the way doesn’t say that schools are unsafe. It says that they are a relatively safe environment,” he said.

“It doesn’t call for the closure of schools, that was a decision made by government. But it does say that if there is a full closure of schools that we should have regard to the negative effects of that and make special provision in some cases and that is what we’re doing for those with special needs and in the sixth year for very good reason.”

The government has faced a backlash from teaching unions and some students and parents over the decision, with one secondary school in Dublin confirming that it will not be re-opening its doors next week.

“With numbers of the virus at almost 8,000, we do not believe it is safe to open the school,” said the principal, who asked to remain anonymous.