Army could be drafted in to administer Covid vaccine 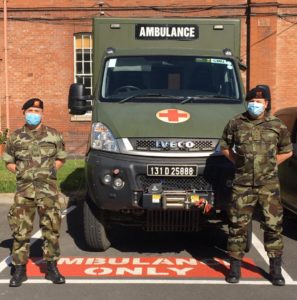 The HSE is in talks with the Defence Forces about drafting in army personnel to administer Covid-19 vaccine and alleviate mounting concerns over capacity issues, according to the Irish Examiner.

News of the discussions comes as it has emerged the European Medicines Agency expects drug maker AstraZeneca to apply for approval of its Covid-19 vaccine next week, with approval likely to be granted by the end of the month.

At present, given capacity issues, the HSE plans to deliver only 40,000 shots of vaccine per week through January and February.

With each person needing two shots, it would mean the national roll-out would last well into 2022 at current levels.

It is understood that army medics could be trained to give the vaccine.

Talks are also understood to be ongoing with large sporting sites as possible locations for mass vaccine delivery.

The chair of the National Immunisation Advisory Committee, Professor Karina Butler, has described as “encouraging” news that approval of the AstraZeneca could be in place by the end of the month.

The AstraZeneca vaccine does not have the same stringent requirements as the Pfizer vaccine.

She explained that the AstraZeneca vaccine was not as time-sensitive in comparison to the Pfizer vaccine which has to be administered within a limited time.

Ireland would stand to get a large tranche of the vaccine which would enable the vaccination programme to extend to “more people very quickly”.

The European Commission indicated earlier that it will add up to 300 million extra vaccine doses to its order with Pfizer/BioNTech which will eventually mean extra vaccines for Ireland after March.

The renewed focus on this particular vaccine comes as a study carried out by Pfizer and the University of Texas Medical Branch appears to indicate the vaccine will be effective against new strains identified in the UK and in South Africa.