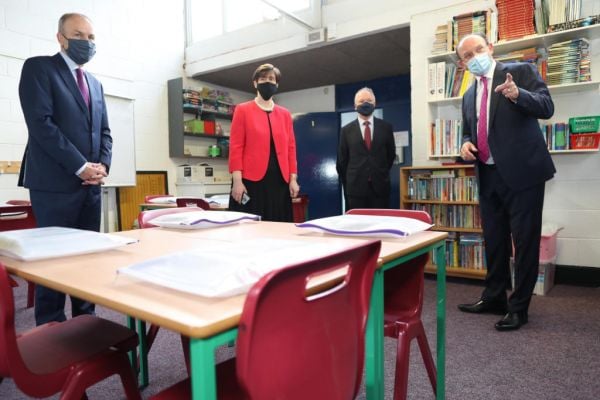 The Government has performed a U-turn on its plan for Leaving Cert students to attend school for three days each week.

Final year students will now engage in remote learning for five days a week until the end of January, it is understood.

The plan would have seen up to 80,000 students return to classrooms from Monday. It was announced on Wednesday as part of Ireland’s new lockdown measures to combat Covid-19, but was scrapped only a day later.

Plans to reopen special education schools, which were due to reopen on Monday, have also been cancelled.

In a statement on Thursday night, Minister for Education Norma Foley said: “It is with regret that I announce that, despite the confirmation by Public Health that schools remain safe, that children in special schools and special classes and Leaving Certificate students will not be extended in-person learning.

“My Department has engaged with the unions and public health officials with a view to maintaining on site learning for this vulnerable group of students.

“It remains my strong belief that this period of time is crucial for the mental wellbeing of all children with special needs.

“I also felt it was the right thing to extend in-class teaching to our Leaving Certificate students who are approaching a crucial time in their exam year.

“Unfortunately I am left with no alternative but to pause the limited reopening on Monday to allow further engagement with all education stakeholders.”

It comes after the Association for Secondary Teachers in Ireland (ASTI) teachers’ union said its members would not comply with the directive for a partial reopening amid concerns over safety for students and staff.

The union, which represents more than 17,500 teachers, said it was not consulted about the plan and had not received satisfactory assurances that “schools are sufficiently safe” for students and teachers.

The Teachers Union of Ireland (TUI) also met on Thursday evening when it was decided that its 19,000 members would not attend schools on Monday.

In a statement, the TUI “noted the absurdity of the Department of Education treating schools as if they are magically immune”.

The TUI said they welcomed the reversal of the decision, saying it was the right call “that prioritises, at last, the health and safety of our school communities”.

Following the announcement of the Government’s U-turn, Sinn Féin education spokesman Donnchadh O Laoghaire said: “While this is welcome, the lack of any Plan B for schools has created a real mess. Minister needs to use the next three weeks to get it right.”

Earlier, following the announcement by the ASTI, he tweeted: “”That should be the end of that, if the Government has any sense at all. They failed to prepare a contingency plan, and failed to consult with worker reps.”

That should be the end of that, if the Government has any sense at all

They failed to prepare a contingency plan, and failed to consult with worker reps.

Back to the drawing board, and consult properly.

Making leaving Certs a priority makes sense, but next Monday is too soon https://t.co/hdTUtYpTrH

Labour leader Alan Kelly also welcomed the move, saying the Government were “well intentioned in their initial decision but circumstances had changed considerably”.

He called on the Government to engage with unions and “look at all potential” Leaving Cert options.

Prior to Thursday night’s announcement, students also raised serious concerns about their own safety should they return to classrooms.

In an open letter to Ms Foley, Leaving Certificate students from Colaiste Bhaile Chlair in Co Galway called for the department to scrap the idea of having sixth year students return for three days a week.

The letter, posted on social media, said: “Considering the severity of this situation, we cannot help but feel a sense of indignation at the recent decision to disregard the idea of predicted grades, and the decision to put the Leaving Cert students at grave risk by returning them to school.

“According to statistics, the new mutation of coronavirus is contracted mostly by students of our general age group, and therefore we are most at risk.

“The danger of bringing the virus into our homes is all too real.”

The letter calls on the department to consider the option of predicted grades.

An online petition calling for an end to the department’s plans had gained almost 4,000 signatures.

Taoiseach Micheál Martin defended the proposals after they were announced on Wednesday.

He said: “The issue is the mobilisation of people. There’s a big difference between 61,000 people coming in in a staggered way, 61,000 Leaving Cert students, as opposed to a million people which would involve the entire population of teachers and students.”