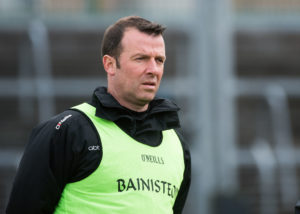 Kilmore GAA Club has unveiled a high-profile managerial appointment, with the confirmation of former Sligo boss Paul Taylor as the club’s intermediate football manager for 2021.

The former marquee forward with Eastern Harps and Sligo was appointed manager of the Yeats County’s senior footballers in 2018. He stepped down in November 2020, soon after Sligo were unable to field a team for their Connacht semi-final against Galway owing to a number of Covid cases within their squad.

Taylor has now thrown his lot in with Kilmore and will replace Cian Smith who was taken up the reins in Boyle.

“Kilmore GAA are delighted to confirm the appointment of former Sligo player and manager Paul Taylor as the new manager of our intermediate team.

“Paul brings with him great experience in both playing and management.

Taylor will be trying to guide Kilmore to intermediate football championship glory for the first time since 2016, but faces strong competition from the likes of St. Faithleach’s, Fuerty and last year’s beaten finalists St. Dominic’s in what is sure to be a fiercely competitive championship later this year.